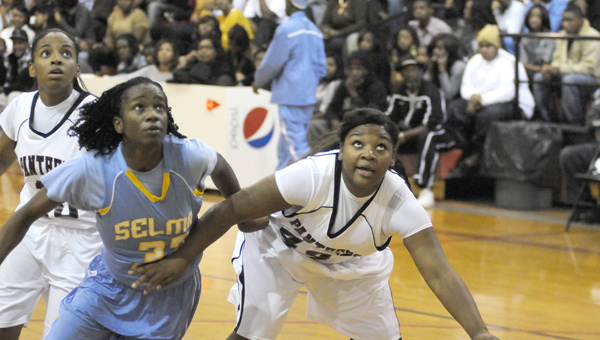 The 7-0 run that the Selma Lady Saints opened the game on was a sign of things to come, as they rode a huge second quarter to defeat the rival Southside Lady Panthers 51-28 on the road Saturday.

Anthony Harris, head coach of the Lady Saints (8-2), said his team had strong point guard play, solid free throw shooting and intensity in its win over the Lady Panthers (5-2).

“We came out with a lot of intensity tonight,” Harris said. “We played sloppy last night down at Keith even though we won the ball game. We ended up playing our game tonight. We looked like Selma High. It’s a big victory for us.”

The Saints would start on a 7-0 run that included a Brianna Richardson game-opening three, but the Panthers would get on the board with a three from Takari Nelson, and would end the first quarter trailing 13-5.

The Lady Saints would explode in the second quarter, shutting down Southside and outscoring the Lady Panthers 16-3 in the quarter, taking a 29-8 lead into halftime.

The Lady Panthers would not get any closer than 20 points the remainder of the way.

Jason Bothwell, head coach of the Lady Panthers, said his team will go back to the drawing board after a tough home loss.

“It’s just a humbling loss,” Bothwell said. “We’ve been working hard, but not working hard enough. Any time you miss 18 plus layups in a game, it’s going to be hard to win no matter who you’re playing.

“The upside to it is we live to fight another day and start area play Monday. We just look forward to playing this game again. There’s no doubt in my mind that the play will be different down the road.”

The Lady Saints will travel to Hayneville on Tuesday, Dec. 13 to play Central Hayneville.

The Lady Panthers will begin area play on Monday, Dec. 12 when they travel to Jemison.

By Robert Hudson The Selma Times-Journal   The Selma Saints were able to hold off a late comeback attempt, as... read more