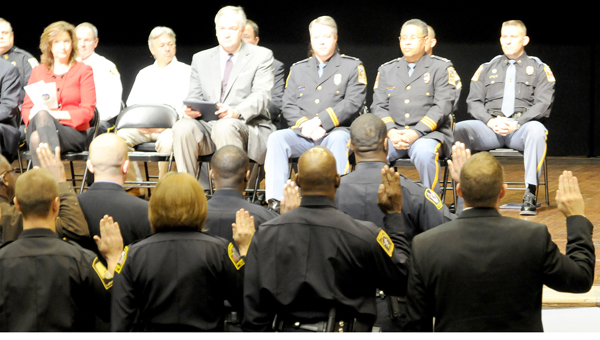 After 12 weeks of training and 480 hours of instruction, 18 cadets from all over the state gathered at the Earl Goodwin Theater on the campus of Wallace Community College Thursday to officially realize their dream of becoming police officers.

Cadets ranged from the Selma Police Department to the Alabama Board of Paroles and Pardons, and each was enthusiastic about reporting to their respective jobs.

Alabama Criminal Justice Training Center Commander Damon Summers said each member of the class had answered the call to make their respective towns, counties and the state of Alabama a better place to live.

“Each of them has stepped up to make a difference in their community,” Summers said. “It’s an honorable and noble sense of purpose and direction.”

In their final day of instruction, Alabama Attorney General Luther Strange was in attendance to offer some final pointers to the cadets.

“Through the course of your career, you’ll experience many exciting, heart pounding, heart-wrenching, heart-warming events, some you will never forget,” he said. “You will see changes to the people, places and things in your community, and you will see changes within yourself. There is one thing that will not change however — your role in society to serve and protect.”

Family and support systems, Strange said, should remain a priority for each officer.

Because these people have stood behind the cadets through their training, it’s now time for the cadets to return that support.

Strange also stressed the importance of having men and women who are willing to take on the obstacles officers often face.

He encouraged each officer to remember why they chose this profession and said he was proud to serve alongside each one.

“Having dedicated people in law enforcement is important at every level of government,” he said. “Your responsibility is to protect the peace and security of Alabama and uphold the law in seeking justice. It’s my privilege as Attorney General to be your partner in that effort.”

Patrolling the streets, Strange said, is not getting any easier. He encouraged each officer to stay true to themselves and their profession.

“As police officers now in the 21st century, you are going to face some difficult challenges,” he said. “You’re going to face issues that will come and go. The thing that will be constant is your integrity and training.”

During the ceremony, several cadets were honored for their leadership roles. Selma’s own Quinton Benton was elected Sergeant at Arms of the 142nd session, Joseph C. Hicks of Luverne was elected president, Lacy K. Schumerich of Dothan was elected vice president, Justin A. Spence of Elba was elected secretary and treasurer, and Kendrick Howell of Linden was elected chaplain.