Soccer is a family affair for Dundores 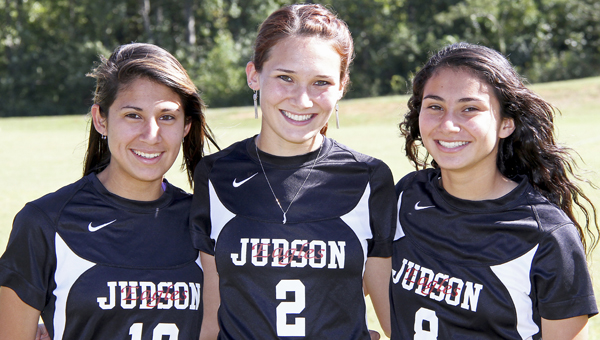 The Dundore sisters played soccer together this fall at Judson College. Pictured are (from left) Lisa, Emily and Grace Dundore, who are originally from North Carolina. -- Photo courtesy of Judson College

Emily Dundore and her sisters, Lisa and Grace, of Fayetteville, N.C., have the distinction of having played on the same team at Judson College.

“It’s nice to know that if something happens on the field, you have your sisters there watching out for you!”  Emily said.

The Dundores have been playing soccer for as long as they can remember. Their mom, Norma, is from Honduras where soccer is very popular and their dad, retired Army Maj. David Dundore, grew up playing soccer in Oregon and Oklahoma, so it was only natural for their parents to encourage the children to love soccer like they did. Judson soccer coach Ken Headley said he’d coached sisters before, but had never had three sisters on the same team.

“Lisa is one of our inaugural players and will have a couple of records for Grace to make a run for,” Headley said.

“Emily has been a backbone to the team since she first stepped on the field. As the freshman, Grace will continue in the path of her older sisters, but I’m sure she’ll cut new trails as she progresses.”

Inspired by her parents and her older brother, Harry, Lisa Dundore, the eldest sister, began playing soccer at age 4. She participated in gymnastics and basketball, but chose soccer as her primary focus.  Lisa graduated from Berean Baptist Academy in Fayetteville in 2008 and planned to attend a college near her home.

Meanwhile, Judson was beginning a soccer program.  When the soccer coach saw her statistics, he offered Lisa a scholarship.

“I’m glad I chose Judson—I appreciate how close our team is,” Lisa said.  “I think if I went to a bigger school we wouldn’t be as close. Here we have the freedom to talk about what we believe and put it in our program.”

Lisa has received many awards for her performance, including United States Collegiate Athletic Association All-American soccer player for 2009, best offense in 2010-2011 and honorable All-American team for the 2011 season.

Emily followed the lead of her older brother and sister and began soccer at age five. Like Lisa, Emily was involved in many activities such as gymnastics, cheerleading and basketball, but found greatest success in soccer.

Emily says that while she and Lisa were able to play together in high school, playing together at Judson brought them closer.

Younger sister Grace began soccer at age 5. Like Lisa and Emily, Grace participated in many sports including basketball, volleyball, cheerleading and cross country, but decided to make soccer her primary sport.

Grace graduated from Berean last spring and decided to join her sisters at Judson after earning a soccer scholarship.

Lisa, a criminal justice major, will graduate in June and plans to follow a military career like her dad. Emily, a religious studies and English major, also plans to graduate in June, marry her fiancé, Joe, and move to Indiana.

Grace, a business administration major, will remain as the lone Dundore on the soccer team.

By Robert Hudson The Selma Times-Journal   The Selma High School Lady Saints would jump out to an early first-quarter... read more