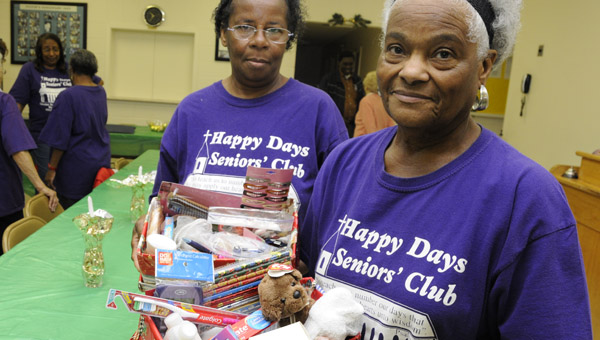 Christmas cheer will be spread from Dallas County to nations in Africa, East Asia, the Pacific, Europe and the Middle East this holiday season through the Happy Days Seniors. -- Desiree Taylor

Thanks to a local organization a little Christmas cheer will spread to children around the world this holiday season.

In its first year as participants, the group wrapped and sent a total of 41 boxes internationally. Group director Dorothy Martin said she first heard of the community service project through Elkdale Baptist Church last year and wanted to help.

“We do a lot of outreach and I thought it’d be something we would do … and around the first of November I thought about the boxes and I made a commitment to doing it,” Martin said. “I brought the box to the group, we had so much pleasure in getting boxes together; we were so excited, we packed boxes so tight we could hardly pack them.”

The group, which consists of seniors representing various local churches, bought items for the boxes and Greater St. Paul Missionary Baptist Church helped to pay for each box’s shipping.

“Boxes cost $7 to ship … a lot of donations for the boxes came from the church,” Martin said. “We’re seniors on the move.”

Churches from across Dallas County also participated in the project, bringing their boxes to the Relay Center for Dallas County at the Selma Baptist Association Office on Broad Street, where they would later be sent to Linden and then to Atlanta where Christian literature, written in different languages, would be inserted. More than 2,000 boxes were transported from Dallas County alone with the help of an 18-wheeler U-Haul from Clean Machine Rent-A-Car.

“This is huge,” said area coordinator Kitty Singley. “We had about 20 volunteers throughout the week to help us package. We shipped boxes out Nov. 21; it’s amazing … it’s a spread of Christianity throughout the world. Most of these kids have never heard of the Gospel and some never had a Christmas.”

Last year, 8.2 million gifts were collected worldwide in 13 countries and sent to 108 countries.

“Just knowing who you were reaching brought back the meaning of Christmas,” Martin said smiling. “Many of the children will be excited about what they will get.”

The Happy Seniors Club meets every Tuesday from 9 a.m. to 11 a.m. at Greater St. Paul. All seniors are encouraged to attend.

This architectural rendering shows what the Black Belt Family Farm Fruit and Vegetable Marketing and Innovative Center will look like... read more