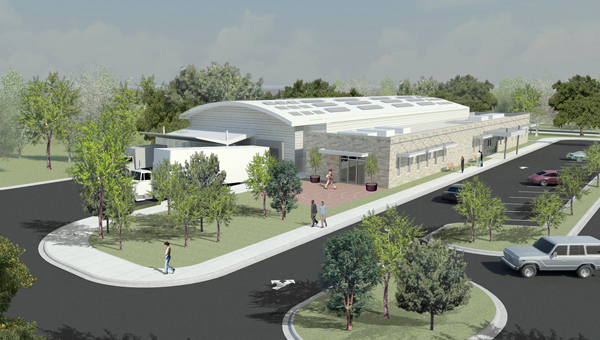 This architectural rendering shows what the Black Belt Family Farm Fruit and Vegetable Marketing and Innovative Center will look like once completed. -- Special photo

In Matthew 13, a sower is described at throwing seed on four types of ground. There was the seed that landed along a path and was devoured by birds. There was seed that fell on rocky ground and failed, while others fell among thorns and were choked.

Then there was the seed that fell on good soil and produced grain, “some a hundredfold.”

It is that chapter and verse organizers and leaders of the new Black Belt Family Fruit and Vegetable Marketing and Innovation Center used Sunday as they broke ground on the new, $2 million project on U.S. Highway 80, just west of Selma.

It is that chapter and verse they hope rings true as this project — nearly a decade in the making — grows closer to becoming a reality.

The facility, in addition to its research and innovation services, will provide area and rural farmers an avenue to have their produce prepared, packaged and sold to retail customers such as Walmart and Whole Foods.

The vendors, and buyers for the retailers, were on hand to show their commitment to the new venture.

The facility, part of which is projected to be up and running in the next year, is a collaborative effort of the state’s land grand colleges — Tuskegee University, Alabama A&M University and Auburn University — and funded through the Alabama Legislature.

“It has been a six or seven year process of getting this come to reality,” Walter Hill, Dean of Agriculture, Environment and Nutrition Sciences at Tuskegee University, who served as Sunday’s event organizer. “It has taken us that long to get this funded and get to this point.”

Hill said the Legislature approved portions of the funding for the project “a little each year” through the universities until the project was funded to the point of beginning construction.

Ultimately, the facility’s purpose, organizers said, is to help “historically and socially disadvantaged farmers working together to develop a profit generating cooperative that facilitates strategic assessment of industry practices and market opportunities in a manner that develops ‘best practices’ that can be shared …”

Hill, and his counterparts from the other universities, joined representatives from state agencies, the Legislature and Congress, at the ground breaking.

The universities also are partnered in the Alabama Agricultural and Grant Alliance (AALGA), which will help manage the facility.

According to a release announcing the facility, which will be 16,000 square feet and include freezers, coolers, meeting spaces, offices and research labs, AALGA will work with a named board of directors and an advisory board that could include such organizations as the Black Belt Commission, Selma-Dallas Farmers Association, Federation of Southern Cooperatives, Alabama Department of Agriculture and Industries, Alabama Farmers Federation (ALFA), Alabama Farmers Market Authority and Alabama Office of Rural Development.

Hill said the intent of AALGA is to “work in partnership with a new Farmer’s Cooperative, so that the cooperative members and other eligible farmers use the facility to receive, package, temporarily store and ship produce.”

The Farmer’s Cooperative has not been formed yet.

Hill said it is also important to emphasize the research and innovation portion of this project.

“This facility will have two labs. One lab will focus on quality control and food safety,” Hill said. “The other will study the nutritional value of the produce and we will track that data on a daily basis.”

As for when the facility be up and running, Hill said it is AALGA’s hope to have the packaging operation up and running in “less than a year.”

Helene Felton looks over some of the items available at the Holiday House Monday afternoon — the first day of... read more