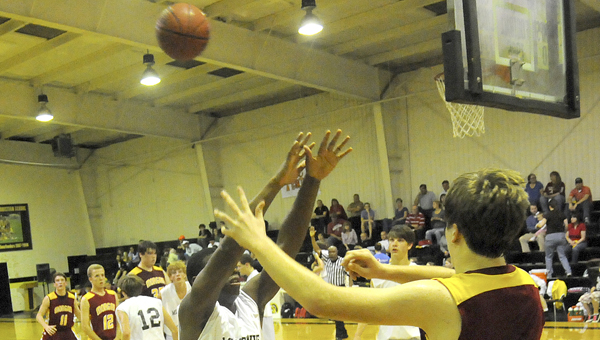 Despite trailing at the end of the first three quarters, the Morgan Academy Senators stormed back to take a 65-56 win over arch rival Meadowview Christian School Monday night.

Meadowview built a 15-13 lead at the end of the first period, and expanded the margin to 31-27 at the half.

The Trojans were fueled early by Dylan Lawrence, who had 21 points, and Tanner Dismukes, who had 10 points.

In the third period, the Senators pulled to within one, behind only 40-39 heading into the final period.

From there, the Senators dominated both sides of the court.

Dalton Lee led the team with 23 points and 12 rebounds, followed by Ford Manderson with 17 points.

The Senators, have added slight changes to their lineup this week because of scheduling conflicts.

In the end, the scheduling conflict resulted in the contests — wherever they were going to be played — being cancelled altogether.

“We noticed that we had both scheduled the games as home games and we were simply unable to find another date to reschedule,” Morgan boys basketball coach Bob Taylor said Monday. “I am not sure what happened or how, but we just couldn’t make it work.”

Scheduled to play in Tuesday’s action was the junior varsity boys and girls, as well as the varsity teams.

Now, with the games cancelled, the next action for the varsity boys and girls teams will be this weekend when the two teams compete in the Tuscaloosa Tournament on Friday and Saturday, hosted by Tuscaloosa Academy.

Above, Travaris Williams goes up for a shot over Wallace Community College defender Bobby King in the Bulldog’s 76-66 win... read more