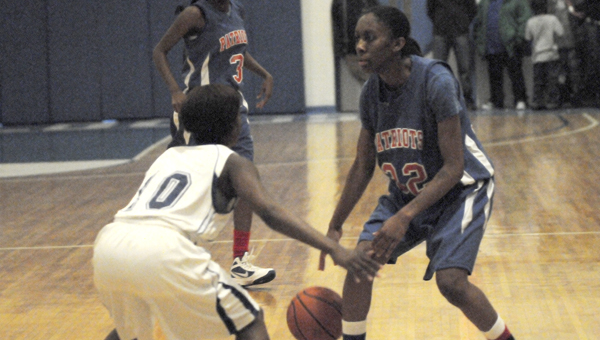 Despite a 25-point effort from Ashley Grimes, the Wallace Community College Lady Patriots came up short in Saturday night’s 67-62 loss to crosstown rival Selma University. The Lady Bulldogs improved to 7-3 on the year and kept the Lady Patriots off balance all night with strong defensive performances from Terrica Craig, above, and others. -- Robert Hudson

The Selma University Bulldogs were able to hold off the Wallace Community College Lady Patriots at home, as they captured a 67-62 victory Saturday.

“The key to victory tonight was just effort and heart and hustle on behalf of our girls,” said Darron Rembert, head coach of the Bulldogs. “It wasn’t statistically the best game, but we just needed to find a way to get it done tonight and that’s just what we did. We found a way to get it done.”

The Bulldogs would hold a 60-52 lead with 4:40 remaining, but the Lady Patriots would begin to climb back, as Ashley Grimes hit a jumper to make the score 60-54 with under three minutes left.

But Selma would answer right back, as Brittney Skipper would score under the basket to extend the Bulldogs’ lead.

The teams would exchange trips to the charity stripe down the stretch, going to the line a combined nine times in the final two and a half minutes.

The Lady Patriots would go six for seven from the line down the stretch, but the Bulldogs were successful enough from the line to hold on to the lead.

April Harper, head coach of the Lady Patriots, said her team just didn’t play as a unit on the night.

“We just didn’t play as a team tonight,” Harper said.

“We didn���t hustle as well as we should, didn’t get back down the floor, had no communication on the court, and it’s just a disappointment. We’ve just got to get back in the gym and continue to play hard and hopefully we’ll be ready for our next game.”

Both teams were dead even in rebounding, grabbing 56 a piece, but the Bulldogs had the slight edge shooting from the field, hitting 34 percent of their shots compared to the Lady Patriots 28 percent.

Treasure Baker led Selma with 18 points and 11 rebounds, while Skipper added 15 points and seven rebounds for the Bulldogs.

The Wallace Community College Patriots were one step behind Marion Military Institute all night in a 68-49 home loss Wednesday... read more