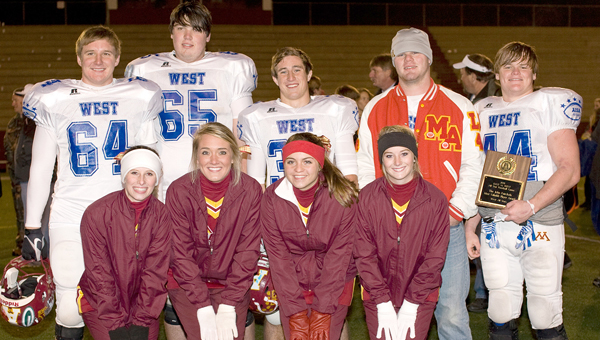 When five Morgan Academy football players left the field Thursday in Prattville, they left it as winners.

The West All-Stars defeated the East All-Stars 29-6 in the Alabama Independent Schools Association All-Star game, with Morgan running back Parker Hughes taking home MVP honors for the West after racking up 229 yards and three touchdowns on the ground.

Hughes said he was honored to take home the ‘John Faircloth Most Outstanding Player Award,’ but gives all the credit to those who paved the way for him on the field.

“It’s a real honor to win it, but, like always, I couldn’t have done it without the line that we had,” Hughes said. “They did a great job. We’re All-Stars for a reason. We all played hard all season. It’s a big time award for me. I’m happy I got it, but I’ve got to give all my props to the other backs blocking for me and the lineman blocking for me. I couldn’t have done it without them.”
Morgan was well represented as Hughes, offensive linemen Brody Keel and Hunter Rogers, tight end/linebacker Dylan Steward, and running back MaCain Levins represented the Senators on the West All-Stars.

Morgan was also represented on the sidelines, as Senators cheerleaders Ashley Moore, Evelyn Stewart, Kalli Jones and Katy Skelton were also selected to the West All-Stars.

Rogers said the game was a great experience, and he’s glad he got to take the field with his Senators’ teammates one last time.

“It was fun, I had a good time, met a lot of new people and I’m just glad I got to do it,” Rogers said. “It felt awesome. I’m glad I got to play one more time with a few of my senior buddies. We went out there and won for our side, and it felt great to do that, too. We ended our season with a loss (in the state semi-finals), so I’m glad we got a win to go home with a win and finish the year off.”

Hughes said he just tried to live up to the standard of success at Morgan, and he feels like his teammates did a good job of that.

“A lot of great backs have come through Morgan Academy, and I’ve tried to fulfill that as much as I could,” Hughes said. “I think all of us did real good in the All-Star Game.”

Southside’s Takari Nelson drives to the basket against Keith’s Stephanie Carson. The Lady Panthers defeated the Lady Bears in the... read more