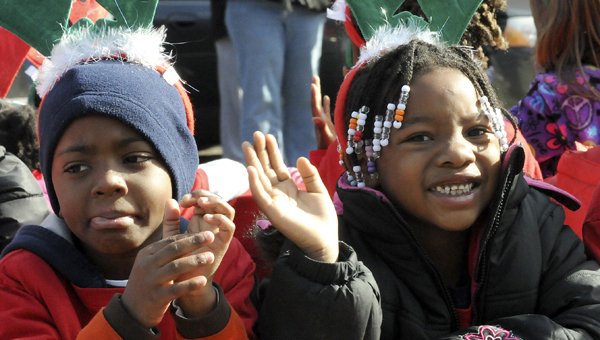 Hundreds turned out for Saturday’s Selma Christmas Parade. Anxious crowds lined the streets as floats, organizations, marching bands and others rolled through town. Above, students from Southside Primary School waive to the crowd as they roll along the parade route. -- Robert Hudson

Thousands from around Dallas County lined up and down Broad Street to get in the Christmas spirit.

Local organizations including marching bands from local high schools, members of fraternities, businesses, government officials, churches and more marched and rode on floats and other vehicles to help kick off the holiday season in the county.

“I enjoyed it,” said Gloria Burke. “It’s good for the children. It’s just good. It’s the reason for the season.”

Shelia Theiss, who attended the parade with her grandchildren, said she enjoyed the parade, and it seemed like the event had grown since last year.

“I looked around and it seemed to be more people this year,” Sheila said. “They had more things in it. The theme ‘Home for the Holidays’ was great.”

Ashlee Hagan said the parade was fun and brought a lot of members of the community together.

“I think it’s great to see everybody out here,” Hagan said. “There’s a mix of young and old. Everybody in town just comes and stands together to enjoy the parade. There’s good mix of floats and community people that comes through. We enjoy it.”

Adults weren’t the only ones pleased with the annual parade, as children in attendance enjoyed many different things.

“I liked the Cedar Park cheerleaders and Sparky and the CHAT cheerleaders,” Nijah Walker said.

Iyana Woods, a student at Cedar Park Elementary, said she liked seeing the cheerleaders from her school and their older counterparts.

For others, it was the sounds of the parade that they enjoyed most.

“The best part about it was the bands because I want to be a band player when I go to Martin Middle,” Anna Marie Theiss said.

And some just enjoyed getting a chance to see St. Nick.