Pride on the line 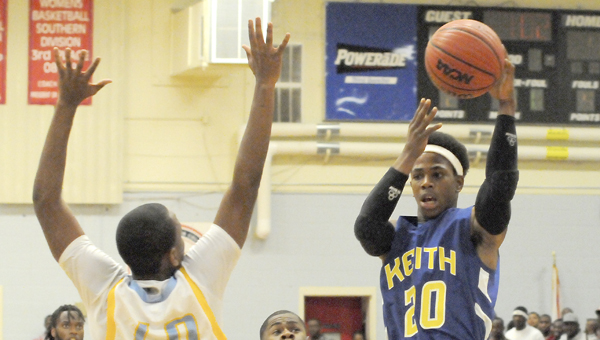 Both the Keith High School and Southside High School coaches are expecting their players to be in overdrive when the two teams meet for a rivalry game Friday night. -- File photo

A pair of local rivals will clash on the hardwood for the first time this season as the Southside Panthers will travel to Orrville to play the Keith Bears.

Games will start at 5 p.m. with the junior varsity boys, followed by the girls and ending with the boys teams.

Cedric Brown, Southside boys head basketball coach, said the Bears are a relentless opponent that will pose a tough challenge.

Brown said, in order to win, the Panthers will have to counter every Bears’ scoring run.

“Like I tell my guys, all good teams can run, and Keith’s one of those good teams,” Brown. “I’m pretty sure they’ll make a run. We just have to counter their run with another run.”

Tommy Tisdale, Keith boys head basketball coach, said one of the first things a person notices about the Panthers is their athleticism.

“They’re very athletic, they’re well coached, they’re going to play all four quarters,” Tisdale said. “I had a chance to watch them in the Selma Thanksgiving Tournament when they played Wilcox, and they looked outstanding. They’ve got an all-star point guard (Mario Oliver) that we’ve got to contend with.”

Tisdale said the Panthers look as good as they have since they made a run to the 4A state championship game in 2005, and one of things the Bears will have to do to win is play the tough brand of basketball that has become a staple of the program.

“One of the things we’ll have to do is be patient,” Tisdale said. “We can’t run because they’re running, we’re not going to press because they’re pressing. We’ve got to do what Keith does and try to take care of a lot of the things we do and correct some of the mistakes we’ve made in previous games. If we just play Keith basketball, hopefully everything else will work itself out.”

Both coaches expect their players to play the intense style of basketball that comes along with a rivalry game.

“In a big rivalry like this, it’s almost compared to like a Selma High game because our guys kind of get up for this game as well as theirs,” Brown said. “The past two days, they’ve responded real well at practice. I’ve seen a little bit more focus because it’s Keith. They prepare for a Keith game as if it’s an area game. They take it real serious because of the relationship they have with the guys at Keith, as well as the relationship that coach Tisdale and I have.”

“Me and coach Brown, in the coaching world, we’re probably best friends,” Tisdale said. “He’s somebody I call probably, if not every night, every other night, I know. We talk X’s and O’s. Our programs are very familiar with each other. Our kids, for the most part will know each other. The familiarity will be there on both sides. Both teams will come out ready to play.”