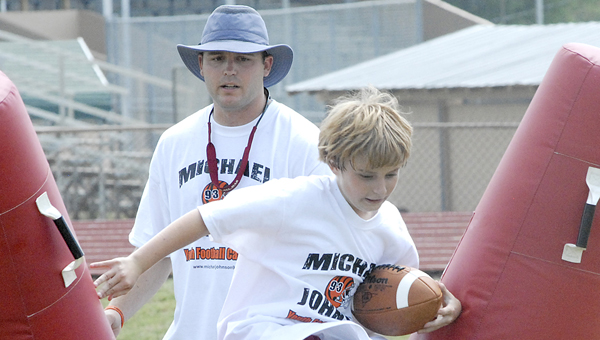 Morgan Academy head football coach Brian King, who assisted with the MJ93 summer camps, is resigning his position at the top of the Senator football squad. -- File photo

Just a few weeks ago, the Morgan Academy Senators were preparing for a Class AAA AISA semi-final playoff game. They were spending time game planning for Glenwood and hoping for a trip to championship game in Troy.

Unfortunately, they fell short and their season ended.

Now, the Senators are preparing for an entirely different experience as they search for a new head coach.

Morgan Academy head coach Brian King told school officials two weeks ago his plans to leave at the end of the school year and told his players Monday.

“It was tough to tell them I was leaving,” King said Thursday. “Some of them took it hard, but they understood why I made this decision.”

Last week, King became engaged and plans to move to Jackson, Miss. and hopes to continue coaching as he completes his teaching certification and begin a family.

King, who is a Morgan graduate and played football at Milsaps College in Jackson, took the Senators to the Class 3A playoffs each of the three seasons he served as head coach. Prior to that, King coached the Senators’ younger teams.

“These are my kids. I don’t have a family yet, so these players are my kids and it’s tough to leave, but this is an change in my life I am excited about,” King said. “I want this program to continue moving forward without me. These kids have been warriors in how hard they have worked and I hope that will continue.”

Skipper said there isn’t a timetable for choosing the next head coach, but that the school is taking applications.

“We formed a search committee at our board meeting and we’ll be looking at salary ranges, expectations and those types of things in the very near future,” Skipper said.

“At this point, I am looking at options and interviewing,” King said. “I hope to continue coaching, but this might have been my final coaching job.”

King said he will work through a program at Milsaps once he returns to Jackson, where he can complete his teaching certification.