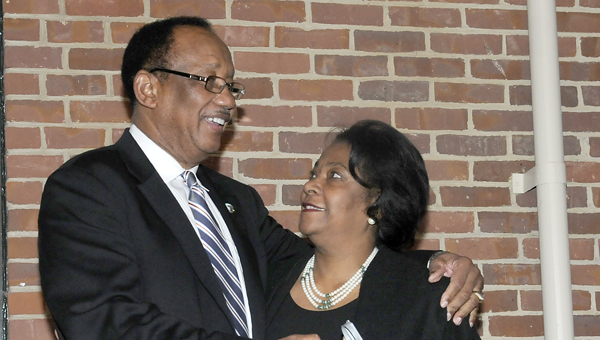 Adorned with sparkling lights standing adjacent to Selma City Hall, the city’s Christmas tree lighting marked the beginning of the holiday season for many. Dignitaries, officials, veterans and members of the community came together for joyful song, fellowship and commemoration of the Christmas season.

“We appreciate the sacrifice you’ve made for our freedoms,” Evans said. “I want to thank the office of planning and development and the chamber of commerce for putting this together.”

“It was great — this is the start of the Christmas season and I’d like to thank the citizens for coming out,” Bowie said. “Hopefully, this event brought the community together.”

Citizens who braved the cold during Thursday’s event, also said they enjoyed the ceremony. Selma newcomer Olivia Whiddon came to hear her son Jack sing with his class.

“I’ve come to this to support the mayor, the chamber and rotary club,” Wimberly said. “Christmas is a wonderful time of year to come together and express … love and joy.”

Those in attendance also chimed in with unified caroling, before Evans and first lady Jeannie, turned on the switch to light the tree to end the program. The event was sponsored by the City of Selma, Downtown Selma Association and Selma Rotary Club.

Morgan Academy head football coach Brian King, who assisted with the MJ93 summer camps, is resigning his position at the... read more