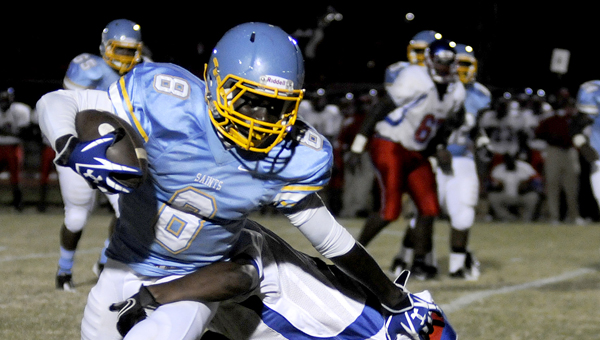 Changes in regions and classifications will make putting together a football schedule a little tougher for Dallas County athletics directors. Many have voiced interest in creating more in-county rivalries to save on travel and draw larger crowds. -- File photo

Now that the dust has settled and every coach and athletic director knows who their region opponents are, the task of scheduling non-region games can begin.

After the recent release of the Alabama High School Athletic Association reclassifications for the 2012-2014 seasons, athletic directors are looking at the effects the moves will have on football scheduling.

Evans said the scheduling of the time and place of the seven region games is set to begin soon.

“Coach (Leroy) Miles, our football coach, is attending a meeting next week in Demopolis and at that time he will start the scheduling process with the other teams in the region,” Evans said.

Evans said Selma will continue its rivalry with Southside, which dropped down to Class 3A, and is looking at potentially starting games with area teams such as Ellwood Christian Academy, which will leave behind the Alabama Independent School Association starting in fall 2012 to join AHSAA Class 1A region 3 with local school Keith.

“We will continue that rivalry and we have been discussing the possibility of also playing some other local schools in the area, including Dallas County and also Ellwood Christian Academy as possible non-region opponents on our schedule,” Evans said.

Tommy Tisdale, athletic director of Keith High School, said he hopes to fit Southside into one of the Bears three open spots after playing them in football this past season.

“The seven region games are set in stone, not the place and time, but the opponents are set in stone,” Tisdale said. “We only get three games to flex with, which are weeks one, five and ten. We’ve normally played Southside week five and hopefully we can keep it there.”

Tisdale said he leaves the football scheduling completely up to Bears’ head football coach Harry Crum, but he said, from a personal standpoint, he’d love to see more games with opponents in the county.

“Personally, and this is just a personal thought of mine, with us having those three weeks open, it would be ideal if that would lead to games against Dallas County, Southside and Selma High,” Tisdale said.

“Not only does it bode well that we’ve added Ellwood Christian (to the region), but that would give a good mixture of county rivalries, closer travel and better gates for every party involved. That’s what I would personally like to see.”

Tisdale said he thought the meeting between Selma and Keith in a jamboree football game this past August went well, but he’s not sure if the Saints would be available to play in the next regular season.

Parker Hughes and a host of other Senators will represent Morgan Academy Thursday night in the AISA All Star game.... read more