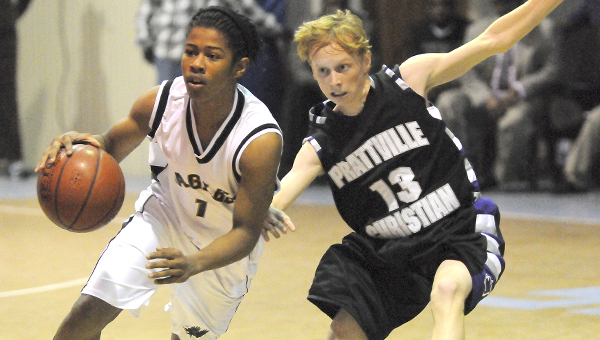 Ellwood’s D.J. Edwards tries to work past Prattville Christian’s Nathan Graham to get a better look at the basket. -- Robert Hudson

“We had the size advantage. I think their press (defense) speeded us up a little bit, got us a little bit out of control,” Hendrieth said. “We had a lot of missed layups. We counted seven missed layups in the first half, so that’s 14 points that we could have had.”

The Panthers would jump out to an early 10-7 lead, but Michael Smith would put in a shot under the basket for the Eagles, then Trevous Sheppard would come back next possession and hit a mid range jumper to put Ellwood up 11-10 with 3:30 left in the opening period.

The Eagles would control the paint and take a 17-15 lead into the second quarter.

The Panthers would come alive in the second quarter, as Colin Tice drained four threes for Prattville Christian in the quarter helping them take a 36-27 lead into the half.

Smith would score on a layup on the Eagles next possession to make the score 42-34 with 4:15 left in the third quarter, but that’s the closest Ellwood would get for the remainder of the game, as the Panthers converted threes and free throws and held off a late Eagles’ rally.

Hendrieth said his team will look to go back to the basics after the tough home loss.

“We’ve just got to work on playing together, playing hard, protecting the ball, rebounding,” Hendrieth said. “We’ve got to get back to fundamentals.”

BJ Harris led the Eagles with 17 points, while Michael Smith added 14 points and Irvin Smith had 13 points for Ellwood.

The Lady Panthers would take a 46-10 lead into the half.

Ellwood would make a late push in the fourth quarter, scoring 22 of its 37 points in the final period.
Towanna Clay, Ellwood head girls basketball coach, said her team is young, but she’s proud of its second half effort.

“We have a lot of young girls where it’s their first year ever playing,” Clay said. “Learning the game, the fundamentals, the basics, right now, that’s our greatest challenge. I think they put up a great effort, especially second half coming out playing man-to-man defense, hustling to the ball. We’re just building from the ground up.”

Both the Ellwood boys and girls teams will take the court again Friday, Dec. 2 when they hit the road to play Autauga Academy.