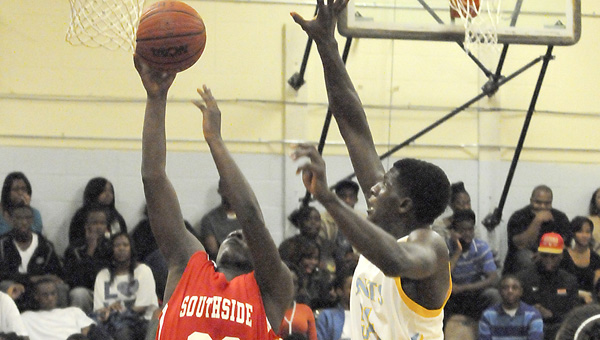 Though the Saints took their lumps early in the tournament, Jackson said they improved in every game.

Overall, Jackson said he was pleased with his team’s play and the crowds that gathered at Wallace Community College to cheer the teams on.

“It went real well — the fan participation wasn’t as strong as it had been on Thanksgiving Day, which had been the real big day in the past, but overall it was really successful,” he said. “A lot of the home people got to see teams from different areas and we got to see a lot of alumni from Selma, Southside, Central-Hayneville and some Keith people even came out.”

“All of the participants were very pleased with the competition,” he said. “Bessemer City, which used to be Jess Lanier, said they came down because last year we had some teams from Birmingham that participated and they told them the competition down in this area helped them set the tone and get ready for the rest of the year.”

Jackson, who is dealing with an inexperienced lineup, said going toe-to-toe with some of the top teams in the area and state helped his squad grow as basketball players.

“There is no doubt this is exactly what the doctor ordered for our kids,” he said. “We have a young group of kids with only one starter that returned from last year, and they now see what they have to do to be winners. You have fun when you win and we tell them all the time people will follow a winner across the world, but sometimes they won’t cross the street to see a losing team. I think the kids really saw what they need to do to win.”

The most encouraging aspect of the tournament, Jackson said, was how his team responded after a tough 53-35 loss to Bessemer City.

“We played a little better as the week went on,” he said. “We played an outstanding game against Southside, which is one of our rivalries,” he said. “If we can just pick up where we left off Saturday night, I think we can continue to make progress.”