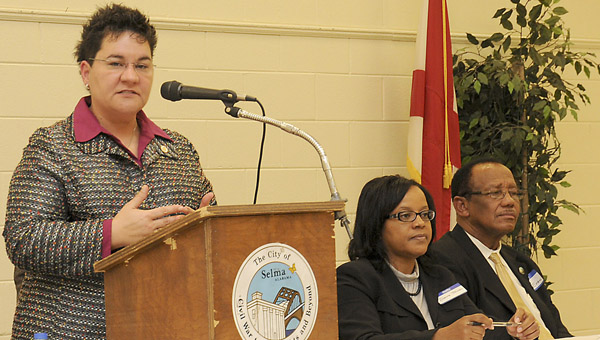 Hundreds packed out the Carl C. Morgan Convention Center Monday to address their concerns and listen to solutions to keeping mental health programs funded across the state.

After talks of Gov. Robert Bentley possibly making budget cuts to community programs such as mental health programs in 2012-2013, Cahaba Center for Mental Health and Mental Retardation consumers and supporters expressed their heartfelt appreciation for the program and its need in the community.

Recovering alcoholics and siblings Grenda and Shepperd Jemison, who’s been sober for a combined three years, credit the center for their full recovery.

“It’s very important that they don’t cut mental health — it affects us gravely,” said Grenda, 50, who plans to pursue her GED and continue with a degree in counseling. “If anything, we need donations — we don’t need any cuts; I’m going to move forward — I have a lot of support at Cahaba Place. If it weren’t for mental health, I wouldn’t be here.”

“It most definitely helps us — we help each other,” Shepperd said. “If they cut the program, they gonna have these folks out here in the same condition.”

“I’m the grandmother of a child who had a very bad report from doctors … that he would never talk or walk or do anything,” Beard said. “He’s doing really good (now) — he makes his own phone calls, he’s doing things no one ever thought he would do.

“If it hadn’t been for mental health, we don’t know what we would’ve done,” Beard said.

“I’m very proud of the hard work my team has done … we’re very excited about those changes,” Baugh said. “We still have a lot of challenges to go as an agency; I think it’s important to provide a voice for those with intellectual as well as those with developmental disabilities.”

Cahaba executive director Lafon Barlow said Monday’s event was critical and she was grateful for the public’s support.

“I was blown away by the turnout,” Barlow said.

“I’m so proud to be from Selma, I’m proud of my folks and I’m proud to fight for them … we need the programs.”