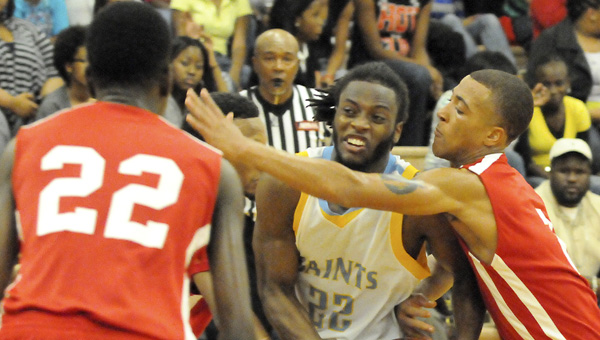 After watching a rivalry that encompasses the entire state, residents of Selma got together at Wallace Community College to watch one of the city’s biggest rivalries, as the Selma Saints defeated the Southside Panthers 47-39 Saturday.

The Saints (2-4) jumped out to a huge lead over the Panthers (3-3), as Southside could never recover in the final game of the Selma Thanksgiving Tournament.

“We played with some fire. Fire and energy,” Jackson said. “They played hard tonight. We came in a little different than we did last night (Friday).”

The Panthers could not find the bottom of the basket and couldn’t stop the Saints from scoring, as Selma would take a dominating 25-7 halftime lead.

Southside would fight back in the third quarter, led by Jeffery Mack, who scored eight points in the quarter including two baskets from behind the arch to help the Panthers chip away at the Saints lead making the score 37-25 going into the fourth quarter.

The Panthers would start the final period strong, as Mack drained another three and Sammarkus Jones put in a shot down low to help the Panthers counter every Saints score early in the fourth.

Courtney Woods would put in a shot in the paint for Southside to make the score 41-34 with 3:54 remaining.

After Murry converted one of two free throws from the line, Woods would hit a pair of free throws to make the score 42-36 with 3:32 left.

Murry would answer back on the next possession laying it in to put the Saints up 44-36.

But Southside wasn’t done, as Jones buried a three with 2:20 remaining to make the score 44-39.

However, the Saints would control the ball in crunch time and the early deficit was too much for the Panthers to overcome.

“From the tip, we just dug ourselves in a hole and we were never able to bounce back from it,” said Cedric Brown, head basketball coach of Southside High School. “Although we fought until the end in the second half, first half really killed us.”

Demario Gunn led the Saints with 15 points and 6 rebounds, while Murray added 14 points and 9 rebounds for Selma.

The Panthers will take the court again Monday, Nov. 28 on the road against John Essex. The Saints will play again Friday, Dec. 2 against Greensboro at Wallace Community College.