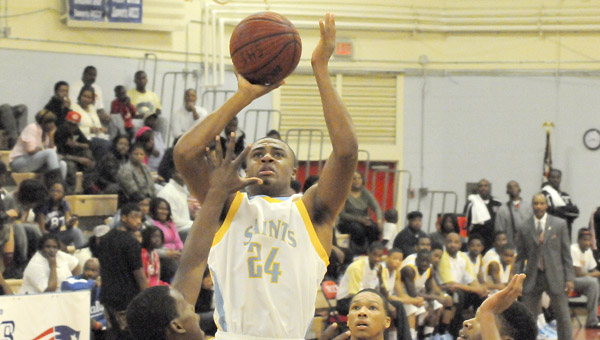 The Southside High School boy’s basketball team got into a hole that it couldn’t climb out of, as the Panthers fell 49-40 to Greene County in a Selma Thanksgiving Tournament matchup on Friday at Wallace Community College.

“They kind of took us out of our game,” Brown said. “We like to run a little bit. They took us out of that and they were patient on offense. That really took us out of what we wanted to do as a team and we could never overcome that deficit from the first half.”

The Panthers (3-2) went into the half down by ten at 25-15, but would fight back to within reach early in the fourth.

Sammarkus Jones started the scoring in the final period as he ended it in the third, with a lay in to put the Panthers within reach at 34-30 with 6:36 left to play.

After Greene County converted one of two free throws, Dameion Craig would add a layup to extend Greene County’s lead to 37-30 with 5:08 left.

Southside’s Jeffery Mack would come right back on the next possession and answer with a three to make the score 37-33 with 4:51 left.
But the Panthers would not be able to get any closer, missing shots and failing to prevent Greene County from scoring in the paint.

Jones led the Panthers with 12 points, while Mack added 10 points.

The Panthers will take the court again Saturday at 8 p.m. against rival Selma High School in the closing game of the Thanksgiving tournament.

The Selma Saints just couldn’t keep up with the Bessemer City Tigers, as what started as close game ended in a 53-35 loss for the Saints at the Selma Thanksgiving Tournament on Friday at Wallace Community College.

“We didn’t play very well, like we just didn’t come out with any fire tonight,” Jackson said. “We didn’t play with intensity. We were two steps slow offensively and defensively. One or two times, we showed a little life, but for the total game we didn’t have that energy.”

The Saints started off strong, ending the first quarter tied 13-13, and would only trail 25-18 at the end of the first half.

But the Saints could not slow down Bessemer City’s Richard Williams, who scored 20 points, most of them coming inside the paint.

The Tigers would pull away in the fourth quarter, capitalizing off Saints’ missed shots and turnovers for easy fast-break baskets.

Demario Gunn led the Saints with 13 points and 4 rebounds, while Kerry Mitchell added 8 points and 3 boards for Selma.

By Robert Hudson The Selma Times-Journal   When the Auburn Tigers’ offense takes the field Saturday afternoon in its annual... read more