Could they play again? 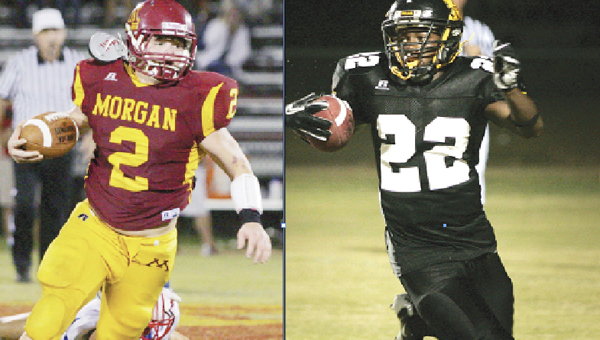 The rivalry between Morgan Academy and Meadowview Christian School, which was once dubbed ‘The Battle of Selma,’ is now a thing of the past because of scheduling conflicts. The late-October game between the Trojans and Senators once boasted such names as Shane Wasden and Reid McMillain, both of whom went on to star at Auburn University. -- Special photo

Just 1.7 miles and two classifications are all that separates Morgan Academy and Meadowview Christian. But those two factors appear to be all the matters in what is keeping the two schools apart from playing one another again on the football field.

What was once an annual tradition between the Trojans and Senators now lies dormant with members of both fan bases wondering if it will ever return.

That game marked the 39th and final time the two Alabama Independent Schools Association programs would meet in football.

The difference in classification, which is based off a school’s enrollment size, is often cited as the hurdle preventing the two teams from meeting again. Morgan competes in AISA’s largest Class 3A division, while the Trojans compete in Class 1A.

“I believe part of it has to do with the size difference in the two schools at this point,” Meadowview headmaster Miriam Anderson said. “Our classification is 1A and Morgan is larger than we are, although, we play them in basketball and volleyball.”

Morgan Academy headmaster Randy Skipper, who arrived after the rivalry had ceased, said the absence of football competition between the two has not been brought up to him, but he could understand why Meadowview would be hesitant to play.

With the rivalry gone, competition on the field wasn’t the only thing lost.

Indeed, pageantry was also pushed aside.

“There was so much involved with it,” Morgan head football coach Brian King, a Morgan alum himself, said. “Kids would caravan, people would have bonfires, people would talk about it. It was like our own Alabama-Auburn rivalry. It used to hold so much weight. A lot of guys played really hard in those games and there was a lot of tradition that came with it. A lot of these kids now don’t even realize what it was.”

King, who graduated from Morgan in 2002 and played in the rivalry, said the rivalry used to be something engrained in the student bodies of both schools.

“I grew up in it and it was always a big deal,” King said. “Meadowview’s always had great teams, so has Morgan. To have that rivalry in town gave kids a little championship to look forward to each year.”

The spirit of the rivalry is something King’s counterpart at Meadowview also believes in.

“I miss the rivalry and I think the whole city misses it,” said Lebo Jones, head football coach at Meadowview. “We’re down in 1A now and Morgan is 3A and that’s probably why we haven’t been playing in the last three or so years.”

Jones is also an alumnus of the rivalry, having played in it and graduated from Morgan in 1991, back when he says both schools were 3A powerhouses.

There was a glimmer of hope in 2009 the rivalry would be renewed, when the two schools scrimmaged one another.

“When (Meadowview) coach (Kenneth) Strong took over we actually got to play a scrimmage game and the kids had a great time,” King said. “There’s some of that old blood still in there. It was fun and hard hitting exactly like it’s supposed to be, but we tried to get something scheduled with them later and I don’t think they collectively wanted to do it.”

Ultimately, the schedules of both teams are put together by the AISA, so a resumption of the rivalry could simply hinge on both schools coming together and expressing an interest to the association.

“We don’t make our own schedules, but we’re a part of the same school association (AISA),” Anderson said. “I’m sure they’d have to be involved in it. I guess if both schools strongly expressed an interest it could be put on the schedule again.”

Skipper said he’d listen to anyone and is open to the idea, if it proves viable.

“I would speak to them no problem, as I would anybody,” Skipper said. “We have played them in basketball tournaments and in volleyball, but no one has approached me as far as football goes.

We’ll talk to anybody. That’s not an issue, it’s just working out a schedule if it’s viable. We’ll play anybody any time.”

Anderson said she would also be open to playing again.

“If the kids think it’s important, then I’d support it. I think the schools now have a fairly cordial working relationship. As long as it wouldn’t negatively impact that, I wouldn’t have a problem with it.”

For the two coaches who’ve experienced the tradition first hand, the desire to renew the rivalry is there.

“Hopefully, we can get it for next year,” Jones said. “I think it’d be good for the city. It was a great rivalry in those days. You had parades in the morning from each school, you had big bonfires the night before, pep rallies. It was just a great event for the city of Selma. It was a good, clean rivalry and it was something to look forward to every year. Every two years, the AISA does the rescheduling and reclassification. Hopefully, we can reschedule it again. We’ve just got to get with coach King at Morgan and see if he wants to do it, and get it approved with the AISA.”

Both King and Jones said a return to the rivalry would not only be great for both schools athletically, but also financially.

“I think it would be a great thing for both the schools to have. It’s closer. We’re only a few blocks away. Instead of having to travel, it would bring money to both schools. I think it’d be a good time to start it back up. It’d be fun to get it back to 1,000 people in the stands watching the game. It’d bring the town closer together I think.”

The Concordia College men’s basketball team could not overcome a 12-0 run by Spring Hill College Tuesday night in a... read more