Thanksgiving on the job 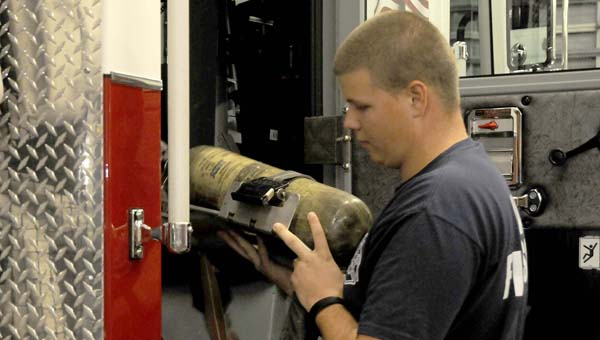 Bryant Ramsey, of the Selma Fire Department, loads gear onto a truck in preparation for a call. Ramsey is one of 18 firefighters that will be on duty Thanksgiving Day. -- Rick Couch

Thursday, while most people in Selma will be gathered around the dinner table giving thanks, a number of public servants will still be reporting to work.

Members of the Selma Fire Department, Selma Police Department and Dallas County Sheriff’s Department, among others, will have to delay their Thanksgiving celebrations in order to keep the city and county safe.

The holidays, Selma Chief of Police William T. Riley said, are traditionally a very busy time for his department. Activity generally begins to pick up during the Thanksgiving holidays because of increased traffic and shoppers.

“For us, with the holiday season brings a time of joy as well, but we also recognize it is a time when a lot of thefts will pick up and for that, our goal is to keep the business community as safe as possible,” he said. “We also want to keep the residents’ homes safe as well while people are out and about.”

The same, Selma Fire Chief Mike Stokes said, is true for his department. There are a few differences in the fire department and other public service units, Stokes said.

“As far as the fire department is concerned, they work a 24-hour shift,” he said. “Instead of working half a day, they are working a full day. This year, the calendar fell where it is the A-shift.”

Because of their odd shifts, Stokes said the department takes special measures to ensure everyone gets to visit their families if at all possible.

“What we have traditionally done in the past on Thanksgiving Day and Christmas Day, whatever shift is working, we give them two hours they can go and eat lunch. We put out a schedule where we still have everyone at work with the exception of two people and we let them go for two hours. When they come back, we let two more go and we do that throughout the day.”

One of the newest members of the fire department, Bryant Ramsey, willl be spending his first Thanksgiving on the job. Ramsey said working during the holidays comes with the territory.

“It’s just part of the job,” he said. “I knew that was part of it when I joined. You have to show up whenever you are needed.”

Like Stokes, Riley said he would love to give every officer the day off. Unfortunately, he said, crime doesn’t take a break.

“I’m sure a lot of them would love to be off, but these are things we just have to do,” he said. “These are the sacrifices we have to give.”

Stokes agreed, saying during the holidays the fire department is still in high demand.

“Thanksgiving or any other holiday is just another day at the office,” he said. “We are here to serve the citizens of Selma to make sure if anything goes wrong they are going to be protected. It’s just another day.”

The Concordia College men’s basketball team could not overcome a 12-0 run by Spring Hill College Tuesday night in a... read more