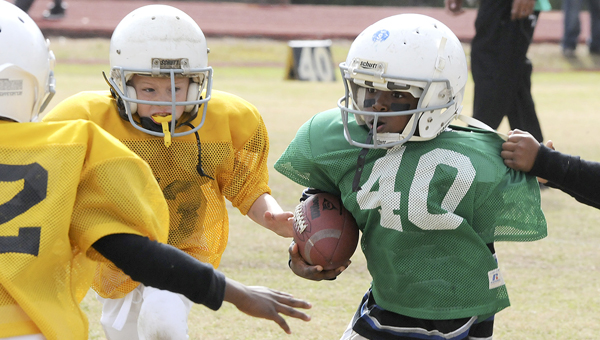 The championship games had already been played, but Saturday marked the day Selma Youth Football teams received their hardware and suited up for the final time this year.

Teams in the league’s 5-6 year old, 7-10 year old and 10-12-year-old groups played each team in their respective age group for one, ten-minute quarter.

Parents and fans gathered for the day that was built to be fun, as well as recognize the champions, coaches and most valuable players of each team and league.

Keshawn Arrington, of the 10-12 year old Vikings team that won its second straight city championship, said the day was the culmination of a lot of hard work.

“It feels good because all the stuff at practice has paid off,” Arrington said. “What we do at practice led us to the championship.”

Arrington’s teammate Armoni Webb said he loves football and the season, and is happy to have his first ever football trophy.

“It’s all about tackles, hitting hard, sacks and all that,” Webb said. “To me, it feels good because it’s my first trophy for football.”

Other champions crowned included the Junior Dolphins of the 5-6-year-old league and the Colts of the 7-10-year-old group, which marked their second straight city championship.

Javares Whitely, head coach of the 7-10 year old Colts, said he’s happy to see his team recognized, and is glad to have served them for the past three seasons.

“We’ve been out here with these kids for three years,” Whitely said. “The first year we went 1-9, the second year we went 10-0 and this year we went 12-1. We come out here to try and teach the kids fundamentals of the game and show them be men.”

Winning is a big deal, but Whitely said it’s even more important to serve a positive role.

Viking running back Devion Moore tries to turn the corner as Jet defenders close in. The Vikings won in a... read more