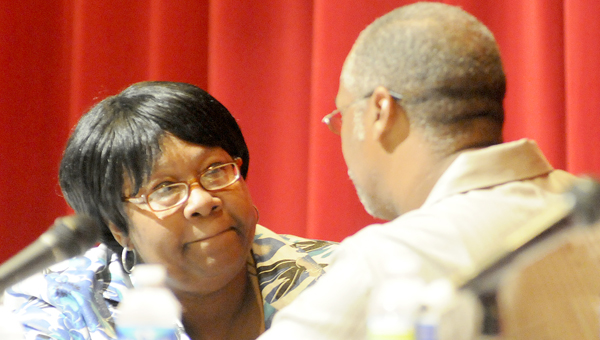 “Upon advice of our counsel, I am not going to say anything about that.”

“Since it is a pending legal matter, I am going to decline commenting on that.”

Whether it was a pleasant dismissal of the question or a simple “no,” members of the Selma City School Board have declined any comment about the case currently filed in Federal Court.

The case, which was filed on Oct. 31 and later amended, pits former superintendent of education Dr. Donald Jefferson against the Selma City School Board, claims three board members violated portions of Alabama’s Open Meetings Act during a meeting on Oct. 13 and at another meeting on Oct. 25.

“At this point, I am not going to offer a comment,” one board member said when asked about the case.

And while the case currently in Federal Court, but expected to be switched back to Dallas County Circuit Court as early as this week, the claims listed do not dispute any of the reasons surrounding Jefferson’s termination.

“This doesn’t mean that we can’t come back at a later date and file additional claims,” Jefferson’s attorney Terry Davis said when asked why it was decided to amend a lawsuit, leaving just the Open Meetings claim. “We will have other (suits) coming.”

According to a report compiled by board attorney Katy Campbell, Jefferson’s termination was based on him entering into an agreement with STI Achievement Services in July 2010 despite objections from the Selma City School Board.

“According to my findings Dr. Jefferson executed the 2010-2011 contract with STI Achievement Services on July 28, 2010 and forwarded it to the company,” Campbell wrote in her report to the board during the Oct. 13 board meeting. “He authorized payment of an invoice for STI Achievement Services in the amount of $156,135.00 on October 22, 2010. Neither the contract nor the payment was brought before the Board for approval.”

In her report, Campbell said her investigation, which was called for by the board during their Sept. 8 meeting, included a “meeting with Dr. Jefferson, reviewing relevant board minutes, reviewing the policy manual and meeting with Ms. [Grindal] Harris, CSFO (Chief School Financial Officer).”

“Dr. Jefferson advised that he had discussed the STI Achievement Services program with the Board at Board meetings on several occasions. He provided me with excerpts from the minutes of the December 9, 2010, February 10, 2011, March 10, 2011, April 14, 2011 and October 14, 2010 [meetings],” Campbell reported. “However, on review of the minutes I only found one direct reference to STI Achievement Services. “

In the weeks after Jefferson’s termination, parents and some board members have used as evidence to have Jefferson reinstated, the need for the services provided and the results from STI Achievement Services’ work in the system.

During the Oct. 25 termination hearing, board members and Campbell said the results of work provided by STI were not in question, rather Jefferson’s decision to sign off on the contract with the company without board approval.

Included in her report, Campbell said the Board’s manual provides direction on how contracts should be handled.

“The 2010-2011 STI contract was not presented to the Board and was not approved by the Board,” Campbell continued. “Based on my findings Board procedures were not followed by Dr. Jefferson to enter into the contract with STI Achievement Services.”

Moments after this report was provided to members at the board’s meeting on Thursday, Oct. 13 at Knox Elementary, board member Frank Chestnut, Jr. offered a resolution, calling for Jefferson to be placed on administrative leave, pending a termination hearing on Tuesday, Oct. 25.

Chestnut, along with board members Holland Powell and Brenda Randolph Obomanu voted in favor of that resolution, with board president Henry Hicks Sr. and Dr. Udo Ufomadu voting against.

On Oct. 25, following a 9-hour marathon hearing, that included Jefferson refusing to testify on advice of his attorney, calling the hearing a “sham,” Obomanu, Chestnut and Powell voted to terminate Jefferson.

The next day, Jefferson still went into work, along with interim superintendent Gerald Shirley.

Also, on that Wednesday, Hicks sent out a letter ordering the system’s payroll clerk and Harris to continue paying Jefferson as if he were still superintendent.

“We are aware of the letter Mr. Hicks has sent to Selma’s Central Office staff and his directive to the CSFO. Alabama Code §16-11-5, which dictates the authority of city boards of education states that ‘no motion or resolution shall be declared adopted without the concurrence of the majority of the whole board,’” Alabama Association of School Boards executive director Sally Howell said on Oct. 27. “As you know, Mr. Hicks is merely one member.

“No one member — or two members — has the authority to bind the board to action. Therefore, his letter has no effect.”

In light of Hicks’ actions and the confusion as to who might have been in charge of the system following the board’s termination hearing, the Times-Journal submitted a Freedom of Information request on Thursday, Oct. 27 asking for particular documents and communications.

As of Friday, Nov. 18, the Times-Journal has only received a copy of Hicks’ letter.

Although Hicks did not want to comment on the case, he did say it was important for the board to move forward.

“I think we’ve gotten to a point where we just need to move forward and get to the business of working for the children of our system,” Hicks said.