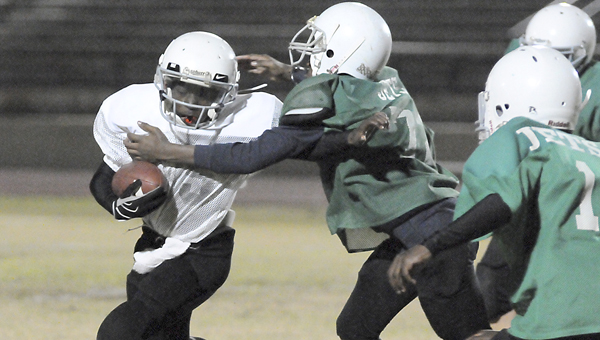 Viking running back Devion Moore tries to turn the corner as Jet defenders close in. The Vikings won in a defensive battle 8-0 to bring home the 2011 league championship. -- Robert Hudson

The Colts got the scoring started in the in first quarter as James Anderson scored on a 32-yard touchdown.

Anderson would score again in the second quarter on a run from one yard out.

The Bears would get on the board as Tristine Marshall returned a Colts fumble 40 yards for a touchdown, but the Bears were unable to mount a comeback.

Anderson said he’s happy to win one for his team.

“It feels good and I did it for my team,” Anderson said. “We just played hard so we wouldn’t lose.”

The second game featured the 10-12 year olds, as the Vikings defeated the Jets 8-0 in a defensive struggle.

The lone score of the game came in the second quarter, as Vikings’ quarterback Jerryone Patterson snuck in for a 2-yard touchdown run.

Keshawn Arrington would add the two-point conversion for the Vikings.

The win completed the second straight undefeated season for the Vikings.

Patterson said it feels good to have all the hard work this year pay off.

“It feels good to be champs,” Patterson said. “We had to work hard in practice, run and get ready for the game. It was hard, but I learned a lot this season.”

The season is officially done, but Selma Parks and Recreation will hold the Youth Football Jamboree Bowl Saturday, Nov. 19 at Memorial Stadium beginning at 9 a.m.

Each team will play every team in their respective age group for one, ten-minute quarter followed by the presentation of trophies to the champions and the awards for offensive and defensive most valuable player for each team.

By Robert Hudson The Selma Times-Journal   After capturing its first victory of the season with a 47-27 win over... read more