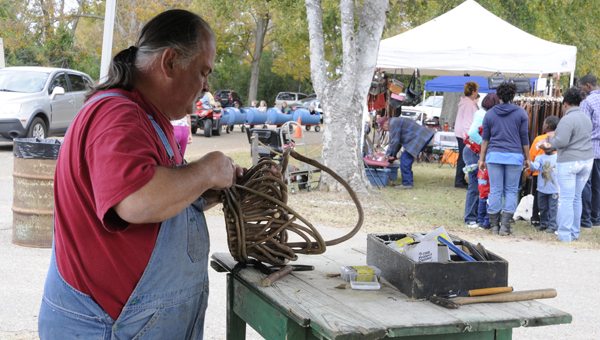 Mark Stinchcomb, whose baskets are on display at the Alabama State Capitol in Montgomery, often peddles his projects at Black Belt festivals like the Antique Tractor Show. -- Rick Couch

If you have been to a festival in the Black Belt or visited the Alabama state capitol, you have probably seen one of Mark Stinchcomb’s unique baskets or Christmas decorations.

For almost two decades, Stinchcomb has mastered the art of making baskets and other crafts from ordinary vines, sticks and wood.

At Saturday’s West Dallas Antique Tractor Show in Orrville, his works were once again on display.

He first began working with baskets as a hobby with his son Daniel.

“I started out with my son when he was about 10 and have been doing it ever since,” he said.

The process, Stinchcomb said, is simple — build the bottom and work your way up.

“You start out with a wooden bottom and build up to the handle,” he said. “Then we nail them in and make it a little more solid.”

Most of his first baskets were relatively simple, Stinchcomb said. As with anything else, the baskets became more detailed as he learned on the job.

“The first ones all started out with an S-type weaving,” he said. “We just learned from there.”

Once, as a promotional stunt, Stinchcomb said he and his son built a basket that could hold five adults. The stunt worked, which led to his crafts being sold at the capitol.

In addition to baskets, Stinchcomb makes Christmas trees and bird houses. He does not have a studio or office.

He said he mostly just sells his crafts at festivals like the tractor show, Kenan Mill and other Black Belt events.

“I just work out of my  house and sell them mostly by word of mouth,” he said.

“They sell them in Montgomery at the capitol and I sell them at festivals like this.”

More than 500 Angels were adopted from the Salvation Army's Angel Tree during the agency's radio blitz held Wednesday in... read more