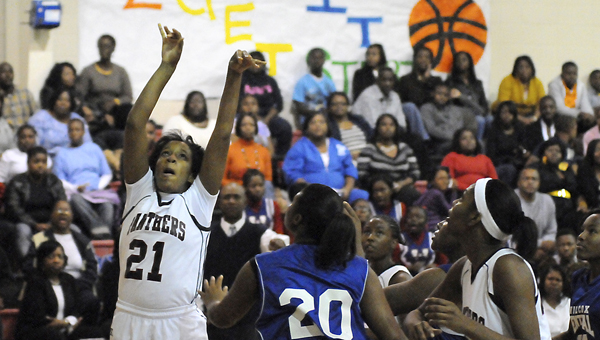 Dontrell Watts goes up for a rebound in last week’s game against Wilcox Central. -- Robert Hudson

In a game of runs it was the Southside Lady Panthers who prevailed, as they outlasted the Wilcox Central Lady Jaguars 57-40 Friday night at home in the season opener for both teams.

Lady Panthers’ head coach Jason Bothwell said his team was able to win by getting the ball to its playmakers and playing tough defense.

“Although it was a sloppy game as far as turnovers go, defensively we stepped up when we needed to,” Bothwell said. “The game kind of went in waves. You had some dry spells, then it picked back up, then it dived again, but we were able to control that tempo defensively.”

Robert Rucker, head coach of the Lady Jaguars, said his team made too many mistakes, which he chalks up to first-game jitters.

“This was our first game of the season and the kids had a little butterflies here and there,” Rucker said.

“We just had too many turnovers, we didn’t rebound well and we missed a lot of free throws.”

The Lady Panthers opened the game on an 8-0 run with baskets from LuShunda Geeter and Takari Nelson.

But the Lady Jaguars would fight back, as a Shalayla Kennedy three pointer cut Southside’s lead to one point to make the score 11-10 at the end of the first quarter.

The Lady Panthers would respond at the beginning of the second quarter, as Nelson drained a shot from downtown to spark a 15-0 Southside run that would put the Lady Panthers up 26-10 with 2:20 left in the second.

Wilcox Central was not phased by the deficit, as they nailed three shots from behind the arch, including one to end the third by Kallisa Mendenhall to make the score 38-34 Southside going into the fourth quarter.

But Southside would seal the victory in the fourth quarter with a combination of good offense and stifling defense, outscoring Wilcox Central 19-6.

Mendenhall led Wilcox Central with 13 points on the night.

Archrivals and other teams from the area will gather at Southside High School Tuesday for the school’s annual basketball playdate.... read more