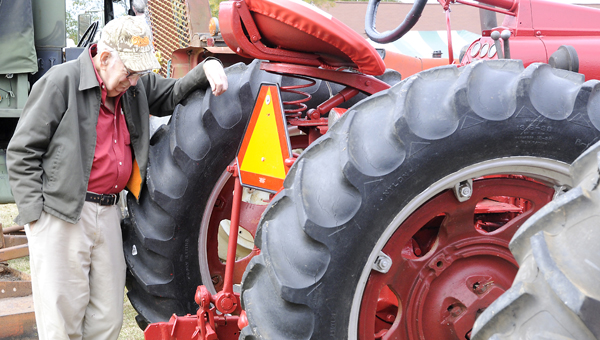 Wetumpka native Bob Wade takes a walk down memory lane as he looks over an antique International tractor. -- Rick Couch

When the event known as the West Dallas Antique Tractor Show began 10 years ago, the title said it all. Organizers threw together a small event for people to display tractors and farm equipment that spanned more than a century of use.

After a decade, however, the show has become so much more.

Vendors, antique cars, music, a petting zoo and numerous other forms of entertainment have joined the venue, which organizers said made it an event everyone can enjoy.

Because of this, event emcee Big Daddy Lawler said, growth has followed.

“It’s getting bigger every year,” he said. “This is the 10th year and it is unbelievable all the folks it brings here from all over the Black Belt. It’s a great, diverse event for everybody and it’s a great event to help out the fire department.”

The tractor show, Lawler said, is no longer just a big draw in the Black Belt. A quick scan of the parking lot reveals tags from travelers who have come from surrounding states as well.

“This started as a small event and it has turned into the biggest tractor event in the Southeast, maybe even the United States,” he said. “That’s not even mentioning the antique car show and all of the other things we have here.”

For locals, the tractor show has become something of a reunion.

Orrville resident Martha Hollbrook said she is always pleasantly surprised by some of the people who attend.

Though the tractor show was once a big draw to farmers and tractor enthusiasts, it is now a family event. Selma native Dan Jones, who attended the show with his son Travis, said he is impressed by how the event has grown.

“I think it’s great,” he said. “There are all of the tractors and there is so much for the kids to do. It’s a great way to spend a fall Saturday.”

There are plans, Lawler said, to build a larger stage and expand entertainment options in the future.

“We received a $5,000 donation for that and we are still taking donations from anyone that wants to help,” he said.

The show, organizer Karen Grimes said, is in its 10th year and was started by Lloyd McAdams, Huck Morgan, Mark Verhoff, Bill Grimes, Deryl and June Vick and the late Ralph Kish.

Proceeds from the show help the Orrville Volunteer Fire Department in its daily duties.

The Bosco Nutrition Center has served 76,959 meals already in 2011. -- Desiree Taylor According to a report from the... read more