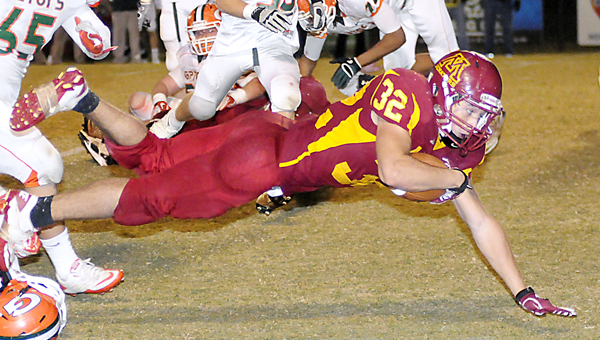 Senators’ head coach Brian King knew his team had a mountain to climb when Gators’ senior running back Xavier Bond ripped off a 62-yard touchdown run early in the first quarter.  Bond found the end zone seven times, while rushing for more than 200-yards.

“That was the one play we worked on all week and when they ran it successfully I knew it was going to be a long night,” he said.  “Nobody’s stopped them the last two weeks. They’re a good team, I don’t want to take anything away from them, but sometimes Goliath does beat David.”

Bond scored again near the end of the first quarter, and added a TD in the second quarter before the Senators’ Parker Hughes capped a Morgan drive with a leaping touchdown to cut Glenwood’s lead to 21-7. The drive featured long runs by Hughes and Trevor Bates, who finished the night with 36-yards on the ground. Hughes, a senior and playing his last game as a Morgan Senator, rushed for 118 rushing yards on 12 carries, pushing his season rushing total to 2,101-yards.

Glenwood runs its record to 8-5 and second year head coach Jason Allen said his team seems to be gelling at the right time.

“We’ve had a really, really up and down year but our kids are starting to come together here at the end,” he said. “It’s been a great experience to see them fight through the injuries we’ve had and the ups and downs.”

The Gators scored on a Dixon run on their next possession to push the score to 27-7, but Hughes again found the end zone on 37-yard run on second and inches and then added a two-point conversion to pull Morgan (8-5) to within 12. But Glenwood finished out the first half scoring with a Deion Goshay TD scamper that essentially broke Morgan’s back, putting the Gators ahead 34-15.

“We knew we had weaknesses and they did a good job exposing them and we didn’t have anybody else to put in those spots and didn’t want anyone else in those spots,” King said.

Dixon added three more TDs in the second half with Goshay adding another to cap the Gators’ scoring.

Morgan scored again on two TD runs from McCain Levins and two more from Hughes, the final one coming with 27 seconds remaining.

“I’m really proud of what our guys did,” King said. “Nobody fought harder. It was a really fun season and these guys inspired me. This was just one of those nights that it didn’t matter how hard they tried.”

Defensively for Morgan, Matt McKinney led with 8 tackles with Hain Beers adding 6 tackles and Adam King and Dylan Steward each adding 5 tackles. After the game, disappointment, and some tears, showed on the players and coach’s faces.

King said he knew it was a difficult game for his seniors and himself to know it was the last football game he’d coached them in.

“I coached those kids since eighth grade and to see them leave, it’s tough,” he said. “I know how hard they’ve worked, how much better they’ve gotten in those five years, it’s hard to see it come to an end.”