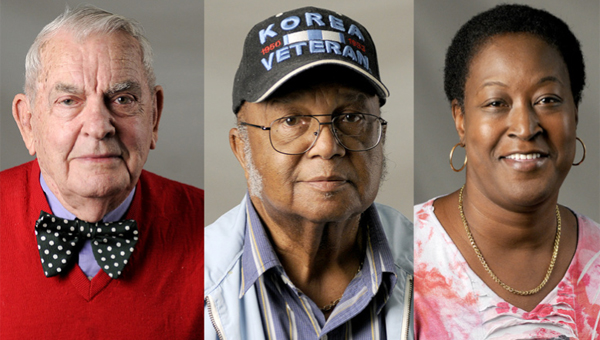 Winfred Brown, Lorenzo Harrison and Aurelia King Craig served their country in the military in different wars and different generations.

From the Allies’ invasion of Normandy on D-Day in World War II, to fighting in Vietnam, to Desert Storm or Operation Iraqi Freedom and the war in Afghanistan, these service men and women risked their lives and sacrificed their time away from family and friends to ensure our every day freedoms.

Today, the Times-Journal honors our veterans with a special photo section commemorating their service. We also honor them by telling their stories.

World War II veteran Winfred Brown served in the U.S. Navy as Lt. J.G. from 1943-1946. Spending most of his time in the Pacific Ocean around islands such as Guam, Sipan, Solomon and the Philippines, Brown said he learned accountability, discipline and how to respect authority from the military.

“I was gunnery officer on a LST (landing ship tank) (and) made the landing on Okinawa on April 1, 1945,” Brown said. “We were still on dangerous waters because of submarines and highly occupied Japanese strongholds.”

After the war ended in 1945, Brown said he enlisted for one more year as the leader of the flagship.

“At the time a lot of officers and men who had wives and families had the opportunity to come home,” Brown said. “I agreed to stay on. I was commanding officer of LCI, or landing craft infantry, (FF) 533. When I returned home from war, I re-entered pharmacy school at Howard College (now Samford University) in Birmingham, completed the course in pharmacy and graduated in 1947.”

After marrying his wife Maude Ellen-Jordan two years later, the couple moved to Selma in 1952, where Brown opened a pharmacy bearing his name.

Brown and Maude have two children — daughter Carolyn in Saudi Arabia and son Durwood in Clanton near Lake Mitchell. The couple has four grandchildren and four great grandchildren.

Brown said he’s proud to have seen many things over the years.

“I lived through the Great Depression and helped to win World War II … I put up with scratchin hippies in the 1960s, I lived to see the first man on the moon and now here in the new millennium,” Brown said. “I’m very grateful to have served in the U.S. Navy. What a wonderful era that I lived in — thank you Jesus.”

“War (Vietnam) broke on Sunday and I came in Monday,” Harrison chuckled. “I enjoyed myself — I did a lot of traveling.”

Working as a supply technician, Harrison shipped a lot of war materials to North Korea.

Harrison is proud to have served his country as a veteran.

“I think the men and women in the military today are doing a real good job protecting our country,” Harrison said. “Some of them lost their lives and I guess that’s the hard part about it … a lot of us made it and some of us didn’t because of the war; God bless America and our serving men and women. And, God bless the president.”

A widower, Harrison is the father of three daughters Tammy, Damisha and Iris, and son Lorenzo Jr. Harrison also has five grandchildren and one great grandchild.

For Aurelia Evans King Craig, serving in the U.S. Army from 1986-1991 was nothing like civilian life.

“It’s a different experience,” Craig said. “At the end I think, men and female are both treated equally — they (the military) look at you as a soldier.”

Enlisting in Germany, the sergeant performed her duties as a combat communications operator for Delta Storm/Delta Shield in Desert Storm. Craig later became a water specialist and served as a nurse.

Married to her husband Craig, the couple has two children, two grandchildren and cares for a niece and nephew. As a veteran, Craig believes those who have served should be treated with much more respect.

“For the service person that served for their country and lost their lives for the country to protect the civilians,” Craig said. “It’s an honor to serve for my country.”

Melvin Hall has been serving in the U.S. Army as specialist since 2001. As a driver, transporting supplies to north Afghanistan, Hall was deployed to Afghanistan in November 2010 when his wife Shaunda, gave birth to their baby daughter Arianna.

“I had to listen to it (the delivery) over the phone,” Hall said. “I was sad because I couldn’t be there. I was worried. I heard the baby cry and I cried.”

After participating in the war on terror, Hall returned home to Shaunda and three children in August, and is still trying to adjust to life outside of combat.

“The biggest thing — kids (are) looking to their mother for what to do,” Hall said. “It’s much scarier when you get back (after fighting). Once you return, you really think about it. You do whatever you can to save other soldiers and yourself … I’m trying to readjust my life, knowing I can be real comfortable.”

Hall said Veterans Day is about remembering the sacrifice.

“Other veterans put their life on the line and sacrifice so much — (they) leave their family and home,” Hall said. “When you come home, so many times it’s not the same and, you’re not the same because of what you’ve seen. You have to readjust. It takes a long time to readjust.”

Members called on to resign, refuse

The soap opera involving the termination of Selma superintendent of education Dr. Donald Jefferson and the power struggle for control... read more