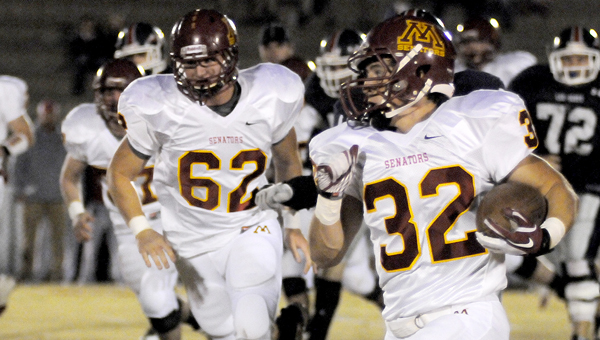 Morgan’s MaCain Levins breaks away for yardage during last Friday’s win over Lee Scott. The Senators, head coach Brian King said, will need to eliminate mistakes and fight hard to get past Glenwood and earn the right to play for an Alabama Independent School Association state championship. -- Robert Hudson

With a win Friday night, the Morgan Academy Senators will be one step closer to their ultimate goal.

The Senators (8-3) will be home when they face the Glenwood Gators (7-5) Friday at 7 p.m. in the Alabama Independent School Association class 3A semifinals, with the winner advancing to the state championship game Nov. 18 in Troy.

Senators’ head coach Brian King said his players know the significance of what lies ahead.

“We’ve just emphasized to our guys that this is it,” King said. “Just like last week, it’s one and done. You’ve got to win to move on and they all get that sense that if they win this game it’s a really big deal and we get to go to the state championship.”

The Senators will match up with fourth seeded Glenwood, which is coming off an upset 56-33 victory over top seeded Tuscaloosa Academy last Friday.

King said the Senators had the luxury of two weeks to prepare for first-round opponent Lee Scott Academy due to their final opponent of the regular season forfeiting, but that won’t be the case this week as they prepare for a Gators team that runs a multiple-style offense.

One of those playmakers is a running back that King says has had success comparable to one of Morgan’s key playmakers.

“They’ve found a secret weapon in their running back No. 2 and I think he’s had just as much success as our No. 2 (running back Parker Hughes) has in the last couple games,” King said. “He’s going to be a real tough guy to stop, but we’re going to do our best.”

King said his team was elated after last week’s 21-10 victory over Lee Scott, and it’ll have to put up a similar performance to defeat the Gators and advance to the state championship.

“The way they (the players) played last week was fantastic,” King said.

“We’ve got to keep our head up all four quarters and play just like that, if not better because Lee Scott was an unbelievable team, but Glenwood’s even better. If we stay relentless, don’t quit, play all four quarters and don’t give them a chance to win with our mistakes, then we should have a pretty good shot.”

The Wallace Community College Patriots were one step behind Marion Military Institute all night in a 68-49 home loss Wednesday... read more