Lady Rams pull away from Keith 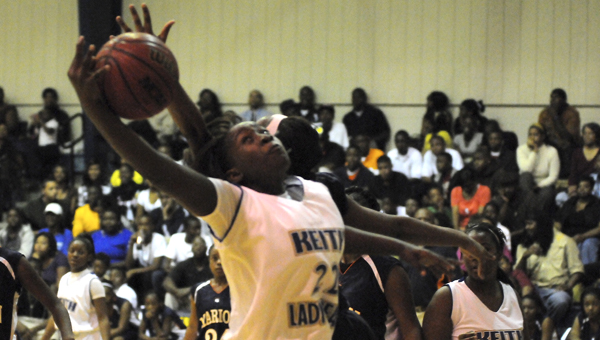 The Lady Bears had problems finding lanes through the Lady Ram defense all night in the opening 47-39 loss in Orrville. Frances Marion got timely shots and good defense to propel the team to the win. -- Robert Hudson

The Francis Marion Lady Rams were able to hold off a late comeback attempt, as they defeated the Keith Lady Bears 47-39 in Orrville Tuesday night in the season opener for both teams.

Lady Rams’ head coach Michael Bedell said his team was resilient in the face of a fourth-quarter Keith run.

“The key was not giving up,” Bedell said.

After trailing for the first three quarters by as much as 12 points, the Lady Bears were able to pull within reach as Naadira Pettway nailed a three pointer to make the score 41-34 with 3:40 left in the game. But the Lady Rams would answer back on the next possession, as Khadijah Bates scored a bucket down low.

The Lady Bears would fight back, though, as Harriet Winchester would convert on one of two free throws and turn around the next possession to drain a three to make the score 43-38 with 2:34 left to play.

However, the Lady Rams would keep Keith at bay, capitalizing off some Lady Bears’ turnovers and getting a pair of baskets from Bates down the stretch to seal the victory.

Lady Bears’ head coach Cecil Williams said his team just didn’t play well enough to win, and now knows what needs to be worked on moving forward the rest of the season.

“I thought we played real bad as far as handling the ball in the first game,” Williams said.

“So, we’ve got a few kinks that we need to work out. Other than that, we just played bad.”

Bates led the Lady Rams with 26 points, while Termera Sawyer added 14 points for Francis Marion, including three baskets from behind the arch.