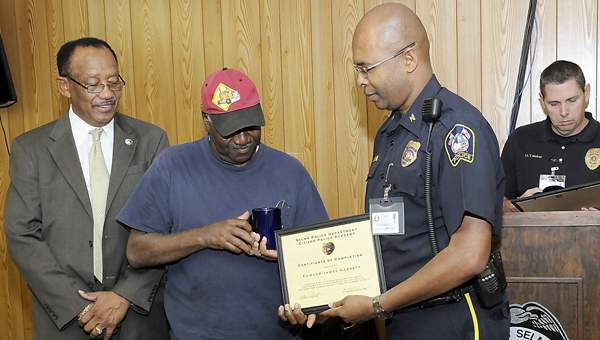 Edward James Garrett receives a certificate Monday night after participating in the Selma Police Department’s Citizens Police Academy. The program has held two sessions and is planning more in the future. -- Rick Couch

For the second time this year, residents of Selma were given the opportunity to experience a day in the life of a Selma police officer.

In addition to classes that better explain how officers approach their job, participants experienced a shift in the squad car and were recently awarded certificates for completing the program.

“They were a good group and we hope they enjoyed themselves,” he said.

Taking part in the academy, Selma Mayor George Evans said, gives ordinary people a better idea of the amount of work that goes into being a Selma police officer.

“You understand now what police officers go through,” he said.

“It’s not as we see it sometimes. When you ride in the car with them, you find out all these calls they get are not as simple as they seem. We hope now that you all can relate to other citizens that it is not easy being a police officer.”

Those who completed the class agreed. Amelia Page said she learned a great deal about the strain that is placed on officers in a large territory.

“It was very interesting,” she said.

“It was very informative. It was a great experience and now I see just how much our officers have to do. I enjoyed it.”

A lot of questions about procedure, others said, were answered through the class.

Hopefully, Selma Chief of Police William T. Riley said, the third session will be as successful as the first two.

Riley encouraged those who took part in the class to tell others so they can also participate in the future.