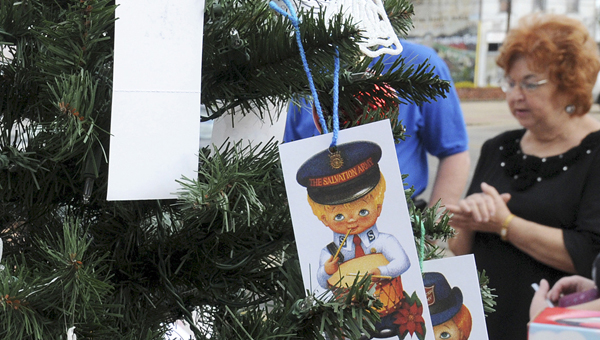 More than 500 Angels were adopted from the Salvation Army's Angel Tree during the agency's radio blitz held Wednesday in front of the Selma-Dallas County Public Library. There are still more angels to be adopted. For more information call 872-1646. -- Desiree Taylor

Thanks to the support of individuals and local businesses and organizations, hundreds of families and their children will be able to have a Christmas this year.

Wednesday’s radio blitz, sponsored by Broadsouth Communication’s WHBB and WDXX and The Selma Times-Journal, to help get Angels from the Salvation Army’s Angel Tree adopted, garnered public support from adults and youth alike.

Broadcasters, volunteers and Salvation Army advisory board members were on hand in front of the Selma-Dallas County Public Library to encourage passersby to adopt an Angel. At noon, officials said they were pleased with the positive feedback.

“We’re very well pleased, we started out with 645 angels and we’re at 366,” said Major Tonya Roberts. “We’re still waiting for banks to come and some other organizations to come.”

As individuals entered and exited the library to browse the Angels up for adoption, businesses and organizations also came by or called-in during the radio broadcast to adopt multiple angels.

Kizy Sims, who volunteers with the program annually, said the event was a chance for the public to help their community.

“It’s something to do for the community — it’s giving and helping,” Sims said. “I think it’s (Angel Tree) very important, and with the recession everything’s bad, so I think it’s great to help those in need. The response has been good.”

Around 3:30 p.m., there were 286 angels who still needed to be adopted. Roberts said she was excited about the turnout.

“We never did anything like this in one day,” Roberts said.

“Some people came by, gave us money and said, ‘you shop for the Angel.’ It relieves a lot of stress from us. People have one month to shop for (their) Angel.”

Even young people wanted to show their support by adopting.

By the end of the blitz 512 angels had been successfully adopted.

Salvation Army advisory board member Sarah Youngblood said Wednesday’s support reminded her of why Selma is such a great community and place to live.

“I’m super excited — it’s so nice to see the community come out … I love stuff like this,” Youngblood said. “It is exciting that people come out to support those who need a little support sometimes. It just warms your heart.”

With roughly a month before the Dec. 9 deadline, 133 Angels remain up for adoption. The library will house the Angel Tree for the next couple of days for those who still want to adopt.

For more information on how to adopt one of the remaining Angels, contact the Salvation Army at 872-1646.

Organizers are asking those who adopted Angels, and those who do in the coming weeks, to return the toys and clothing back to the Salvation Army no later than Friday, Dec. 9.

This allows organizers time to organize all of the items and ensure they are delivered to the proper families.