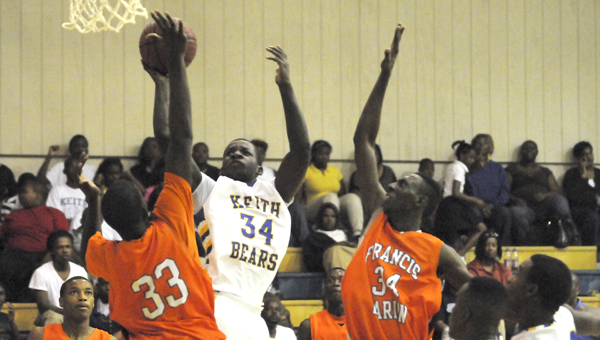 The Francis Marion Rams and the Keith Bears boys basketball teams opened the 2011-2012 season in thrilling fashion Tuesday night in Orrville, with the game going down to the final shot, as the Rams prevailed 58-56.

In a tight matchup that turned into somewhat of a free throw contest at the end, it was a Jerry Mayhand’s three-pointer with seven seconds left in the game that gave the Rams a 57-56 lead , and ultimately, the win.

“We’ve been working real hard in practice. We played hard all the way to the end and fought through a lot of tough calls. Hard work won over tonight.”

After a couple of technical fouls called on the Rams, the Bears made three out of four free throws, but the Rams would answer with a Willie Bennett three pointer to make the score 49-46 Keith.

From then on out the teams would shoot a combined 13 free throws and exchanged the lead five times.

After the Rams took a 52-51 lead with 2:01 to play, the Bears came up big as Ellis stole a Francis Marion pass and laid it in on the fast break to give Keith a one-point lead with 1:48 to play.

The Bears would get another steal and go to the line after a shooting foul, but they couldn’t convert, missing two free throws that would have extended their lead to three points.

The Rams would miss a free throw on a one-and-one on the next the possession, but the Bears again couldn’t capitalize, going 0-2 at the line.

But the Bears weren’t done, as Bobby Barnes scored on a lay-in and converted the and one to give Keith a 56-54 lead with 0:21 left.

That’s when Mayhand stepped up in the moment to hit the go ahead three with seven seconds left.

The Bears would turn the ball over on their next possession and send the Rams to the line, where the only converted on one of two free throws.

The Bears had one more chance with two seconds left, but an Ellis three-point attempt form the left side of the arch bounced off left iron to seal the victory for the Rams.

“Mental mistakes toward the end hurt us,” Tisdale said.

“Some of it was mental. I take the blame for it. I could have done some things a little different down the stretch as far as adjustments.”

Tisdale said failure to convert at the line also played a huge part in the loss.

“We saw what we’ve got to work on,” Tisdale said.

“We got to the free throw line at will and we couldn’t convert. I think we were 18-44 from the line. Anytime you go to the charity stripe 44 times, you should come away with a win.

“It’s back to the drawing board for us and trying to see if we can correct some of the things that went wrong tonight.”

Kenneth Billingsley led the Rams with 11 points, while Ellis led the Bears with 16 points on the night.