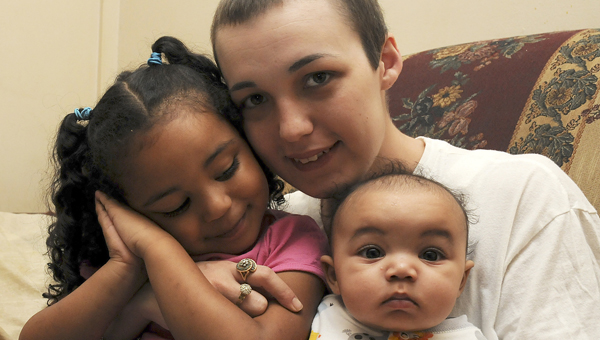 At 23-years-old, Druscilla Underwood is a happy and devoted mother of two girls — Katherine, 3, and Faith, 5 months. As she feeds her youngest, who is nestled safely on her lap, she also keeps an attentive eye on her 3-year-old prima donna who playfully jumps around the room. Smiling and content, no one would ever think Underwood once battled cancer.

Just 27 weeks pregnant at the time, Underwood remembers when she was first diagnosed: the moment as fresh as yesterday.

“I had a lump in my chest and it bothered me — it was at the end of March of this year,” Underwood said. “I told my OB/GYN about it (and) at first, they thought it was normal because your breast goes through different changes when you’re pregnant. She later said ‘let’s do a biopsy to make sure.’”

Underwood, who worked as a cashier at the time, said she had a feeling something wasn’t right.

“When I would come home, my breast would be red and kinda inflamed, I didn’t feel sorry for myself, I just knew I had to do what I needed to do because I had one (baby) here and one here,” Underwood said. “Little girls need their moms.”

Doctors later confirmed Underwood did have cancer in her right breast and sent her to her doctor in Montgomery to have further testing. After her surgeon referred her to the Montgomery Cancer Center, Underwood later underwent chemotherapy treatments around the first of April. Because she was pregnant, her unborn child also had to take multiple treatments.

“They wanted to shrink the mass before they operated,” Underwood said. “I didn’t get sick, nothing happened except my hair fell out … when I started losing my hair, I lost it. She (Faith) would ball up at the end of the day (after treatments) and I felt bad for her, but I had to do what I had to do to keep myself alive. I wanted her to come on out.”

After a safe delivery in June and due to the chemo, little Faith was born premature and with sparse hair. The doctors gave Underwood three weeks to recover from her treatments before returning to them once a week until the end of September. Doctors performed a double mastectomy on Oct. 6, making Underwood cancer-free.

“They went ahead and took both breasts because they found other cancer cells and it spread to my lymph nodes — Stage III,” Underwood said. “They removed lymph nodes in my right breast. ”

Throughout her bout, Underwood credits her husband, Ernest, who had lost several family members in two years, and her family for her strength.

“We’ve been through a lot,” Underwood said. “My husband’s been so supportive — cooking, when I couldn’t do it, financially, anything you could think of. He was cleaning the house, watching the babies.”

Underwood will begin radiation after Thanksgiving and hopes the tremendous support she’s received thus far will continue into the holiday season, so her children can have a Christmas.

Underwood’s family is just one of the families registered as part of the Salvation Army’s Angel Tree program. Her two children are among the 645 children the program will look to help this Christmas season.

“She (pointing to Katherine) likes to read books — she likes anything princess — anything girlie she likes,” Underwood said. “For her (Faith), I’m thinking baby clothes and a few teething things and a few things she can get on the floor (with).”

There’s just one word to describe how Underwood feels: grateful.

“All I kept thinking, ‘God is great’ (and) prayer is a powerful thing,” Underwood said. “I want to thank everybody and anyone who’s helped and kept me in their thoughts and prayers — it really has helped. I believe everything happens for a reason.”