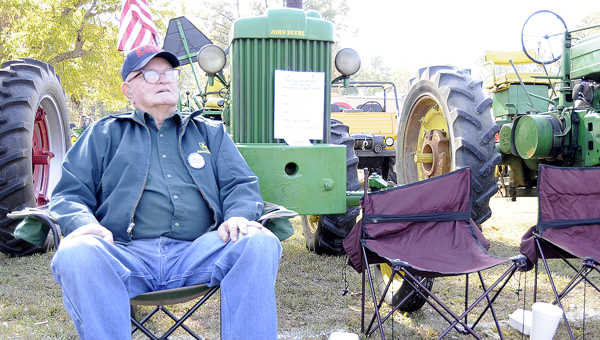 The annual West Dallas Antique Tractor Show will be held Saturday in Orrville. The festival will kick off at 9 a.m -- File photo

ORRVILLE — Saturday, Nov. 12, the engines of tractors will again rumble in Orrville when a fall favorite cranks up.

The West Dallas Antique Tractor Show, which will take place between 9 a.m. and 4 p.m., will again offer something for all ages.

The show, organizer Karen Grimes said, is in its 10th year and was started by Lloyd McAdams, Huck Morgan, Mark Verhoff, Bill Grimes, Deryl and June Vick and the late Ralph Kish.

“The group had a common interest in old farm equipment and talked for a long time about having a get together when someone called their hand and set a time and place for the event,” she said. “There were no plans for a second show until late Howard Gray and his wife Faye asked if there was room at the next show for antique cars. When Howard was told there were no plans for a second show, he responded with ‘oh yes there is, you’ve got a great thing going here and I want to be a part of it.”

The show has grown through the years to offer antique cars, music, and many other activities for children. The show, Grimes said, has also helped offer a boost to a very important part of the West Dallas Community.

“The show has brought the community together to show the Fire Department how much they are appreciated for all they do for the Orrville area,” she said.

Proceeds from the show help the department enhance its capabilities for day-to-day activities.

This year’s show will feature music by the Grasshopper Band, Destiny Brown, Baily Jordan Aguir, The First Baptist Youth Choir and Barbara Pritchett. James “Big Daddy” Lawler will be returning to emcee the event, and Smokey the Bear and Sparky the Fire Dog will make guest appearances.

Grimes said attending the show is like stepping back in time.

“If you enjoyed the county fairs from way back, then you will enjoy the hammer and skillet toss,” she said. “This idea was borrowed from another show who borrowed it from past fairs. This event attracts a large crowd to compete to see who can throw the hammer or skillet the longest distance.”

In addition to the events for adults, Grimes said there are a number of children’s activities including a pedal tractor race, face painting and other arts and crafts activities.

She also said there will be great food, gifts and demonstrations.

“If you are getting ready for Thanksgiving, don’t miss the cake sale on the porch along with some old time music by artist Thomas Garrison Hale,” she said. “As you leave the porch watch for artist giving demonstrations with a potter’s wheel, basket making, quilting, blacksmithing and vine creations. And don’t leave the show until you have visited with the Blacksmith who works nonstop over hot coals, sharing his talent and skills. It is amazing at what he can create with a little heat and muscle.”

The theme for this year’s show is “Saturday in the Park.” Artist Cindy Stoudenmire is designing the T-shirts. Allison Harper has something special planned to recognize the Veteran’s who attend. The Salvation Army will be on hand selling water to raise money for the Angel tree project for Christmas.