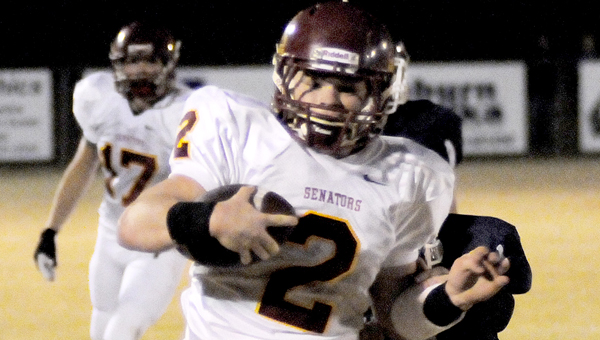 AUBURN — The Morgan Academy Senators were down twice, but they were never out, as they came from behind to defeat the Lee Scott Academy Warriors 21-10 on the road at Judd Scott Field to advance to the second round of the AISA Class 3A state playoffs.

Senator head coach Brian King said Morgan (8-3) never gave up, and that was the key to beating the Warriors (7-4).

“We just didn’t quit,” King said. “We knew we had to play four quarters and that’s what we did. First quarter, I don’t think we came out flat; they just made good plays with their good players. I don’t think our guys were ready for them to score first and it showed, but when we got that second drive and scored that touchdown, it sparked us. Second half, we just played lights out football and I’m very proud of them.”

The Senators opened the game with a 64-yard drive, but failed to convert on a fourth down, turning the ball over on downs.

The Warriors would capitalize with an 85-yard drive capped of by a Marquen Mitchell 6-yard touchdown run to give Lee Scott a 7-0 lead with 0:06 left in the first quarter.

But the Senators would answer back late in the second quarter, as MaCain Levins would shake off multiple Warrior defenders on an 18-yard touchdown run to tie the game at 7-7 with 2:57 left in the half.

Lee would threaten on the next drive getting to the Senators’ 23-yard line, but Morgan defender Hain Beers would intercept a Jeremy Joseph pass to end the threat.

Lee Scott would come out of the half and take the lead on a 27-yard field goal with 6:45 left in the third to make the score 10-7.

Morgan wasn’t phased, as running back Parker Hughes carried the ball six times on a 14-play, 82-yard drive and pounded in the go ahead touchdown from five yards out to give Morgan a 14-10 lead with 11:55 left in the fourth quarter.

The Senators defense would hold tough and one possession later Hughes, lined up at quarterback, found Matt McKinney for a clutch 25-yard catch on third and nine to put the senators at the Warrior’s 18-yard line with 4:20 remaining in the game.

Four plays later, Hughes would cap off another long drive with a 4-yard touchdown run to give Morgan a 21-10 lead with 3:47 left in the ball game.

The Warriors would threaten on the next possession, but it was Beers again who dashed their hopes, intercepting another Joseph pass with 3:23 left in the fourth quarter.

After Morgan ate up some time off the clock, the Warriors would get another chance to cut into the Senators’ lead as they drove down into the red zone.

But it was Beers who shut the door for a third time, intercepting a Joseph pass in the end zone with 1:29 remaining.

The Senators racked up 312 yards of total offense, including 292 yards on the ground.

Hughes led the Senators with 220 yards and two touchdowns on 35 carries.

Levins added 64 yards and a touchdown on ten carries.

Hughes said the Senators had to play as one in order to beat Warriors.

“We gave a team effort,” Hughes said. “I couldn’t ask for more. Our line did a great job and I just ran the ball as hard as I could.”

The Warriors were balanced on the night, with 108 yards on the ground and 102 through the air, but they were hampered by mistakes as they turned the ball over three times and had 75 yards on ten penalties.

With the win, the Senators will be at home Friday night against lower seeded Glenwood, who upset No. 1 seeded Tuscaloosa Academy 56-33 Friday.

King said Glenwood will be a tough matchup for the Senators, but Morgan will work hard to prepare.

“We play an unbelievably fast team in Glenwood,” King said. “We’re going to have to really game plan. I thought our guys did great tonight against the spread (offense), but of course we’ve got to work on keeping containment and things like that. Monday, we’re just going to work on the things we need to work at and then Tuesday, Wednesday and Thursday we’ll focus on Glenwood.”