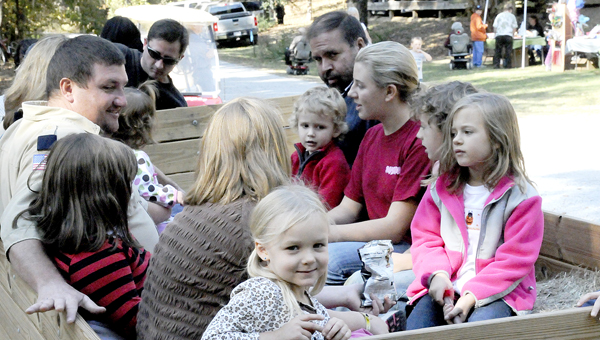 Some of those attending the festival took advantage of a relaxed hayride around the historic site. -- Robert Hudson

Families from all around gathered Saturday to learn a little history, listen to music and just have a relaxing afternoon.

Sylvia Smith, chairman of this year’s Kenan’s Mill Festival, said it was a nice day and turnout was good.

“We’re lucky today to have it be so pretty,” Smith said. “Attendance has been steady. People will come for a while, maybe they’ll have a certain band they want to hear or some will just come to listen to every band and just have a good time.”

Visitors were treated to music, food, arts, hay rides and, of course, demonstrations of how the mill operates.

The festival’s bands specialize in bluegrass music, but this year the festival added some gospel.

“I think everyone has enjoyed the variety of music, and I’ve heard a lot of good feedback about that,” Smith said. “The main thing is we want people to the mill operating. It’s all just a little fun thing, kids can run around and such.”

Smith said the idea to hold the festival came about when the mill was restored after the property was acquired in 1997.

The mill hadn’t been used since 1968 and needs to be operated periodically to stay in working order, so the idea came about to educate while keeping the mill active.

“We need to run the mill periodically in order to keep it operational, so we thought it would be educational and a fun thing for families to kind of see how they used to do that,” Smith said. “So we came up with the idea of having the festival.”

This year, the festival got a little help from the local boy scouts, who were camping on the property for the weekend.

“We’re happy for them to use it,” Smith said. “They’re helping us with the gates and a catfish fry, so it’s good for both of us. We really like to have partners in the community. The Rotary Club helped us build the barn and the Kiwanis Club is going to help us build a snack stand.”

“Next year will be our 10th anniversary,” Smith said. “We’re already looking forward to that and maybe doing something a little extra special.”

Former Saints show they can compete