Former Saints show they can compete 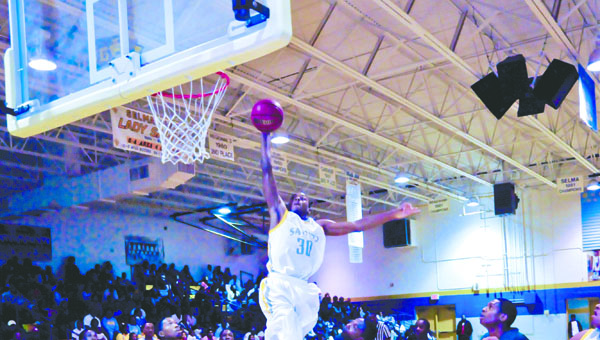 Selma High School’s Charles Eaton cuts through the Central Hayneville defense during a game last season. Eaton is already off to a fast start for Lawson State. -- File photo

Eaton, who played guard at Selma High and led the Saints in scoring last season, was selected to the AHSAA North-South All-Star game as a junior and as a senior was a starter in the Alabama-Mississippi All-Star game this past April, scoring 18 points for the Alabama All-Stars.

“He’s an outstanding player,” Jackson said. “He was one of the highest recruited players in the state last year. Because of grades, he had to go the junior college route.”

Jackson said Eaton has the talent to play at a four-year school, and he knows what it takes to get to the next step.

“He would have gone to a four-year school if his grades were up to par, but now he realizes what it takes to get to the next level both academically and athletically,” Jackson said. “I talk to him just about every other day just to see what’s going on. He’s on the right track.”

Jackson said Eaton got off to a fast start in his first game at Lawson, scoring 24 points.

Jackson said he’s proud of Eaton and happy to see his former players pursuing their goals.

“It makes me feel real good, especially for Charles because he’s a young man like many others I’ve coached who was somewhat of an underdog in the community,” Jackson said.

“To help him achieve something on his way to the ultimate goal feels good.

“He has a bright future. He’s already being recruited by four-year schools and he’s only a freshman in junior college.”

Jackson said he’s also proud of couple other of his players who now call themselves Patriots.

“Selma is home, so we always pull for Wallace Community College,” Jackson said.

“We have two other players who play for Wallace, Dupre Rivers and Jamie King. We’ll be rooting for all three of them. We’ll root for both teams.”