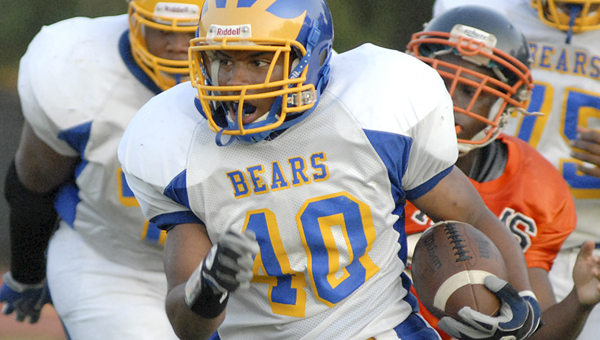 Terrell Velazquez turns the corner during a game earlier this year against Frances Marion. Many of the Keith High School football players pull double-duty on the basketball court. The Bears’ playoff appearance has slowed practice times on the hardwood. -- Robert Hudson

The Keith Bears boys’ basketball team is looking to pick up where it left off last season and make a return trip to Birmingham.

“Our goal at Keith is to win a championship and anything else is short of our goal,” Tisdale said. “It’s actually the goal the kids brought to me and I was very excited about that. I’ve preached it since day one and it’s actually instilled in the kids now. I guess since having a taste of it last year, they see what it’s like and know what it takes.”

But before the Bears can begin their chase for a state crown on the hardwood, they’ll have to see what happens on the gridiron.

A number of the Keith basketball players are also members of the football team, which travels to Sweet Water Friday night for the beginning of the Class 1A state playoffs.

While the Bears are scheduled to open basketball season Tuesday at 5:30 p.m.  at home against Francis Marion, Tisdale said early season games may be pushed back if the Bears win on the gridiron.

“It’s all predicated on football, right now,” Tisdale said. “We want to go as far as we can in football. We’re just hoping the success we’re having in football can hopefully spill onto the basketball court.”

Tisdale hasn’t got a chance to see some of his players in practice yet this season, but he’s confident he’s got a great team returning.

“Right now, I’ve got a lot of guys who play football, so I haven’t gotten a real chance to assess the total team,” Tisdale said. “However, I do like the team I’m returning. We played at the state finals in Birmingham last season. From that team, we’re probably returning nine guys. So, when they do get off the football field, the learning curve won’t be as hard.”

One area in particular that Tisdale sees strength is in the backcourt.

“All my guards are back from last year’s team, which is a plus,” Tisdale said. “My point guard is actually not playing football, so he’s been working out ever since. I’ve also got some young guys that are getting reps that they probably wouldn’t have got had the football players been there.”

Tisdale said his team may have flown under the radar last season, but that won’t be the case this year after their run to the state finals.

“I tell our guys over and over, we won’t sneak up on anybody,” Tisdale said. “This year … as it relates to 1A basketball in the central region, we have the bull’s eye on our back. We are the central region champs and most people feel to get where they need to be, they have to beat Keith, so we’ll probably get everybody’s best shot every night.”

The Bears will look to strong defense in order to make sure they remain successful.

“We’re an aggressive, in your face, defensive-style team and I think, as a program, we’ve bought into that,” Tisdale said.

“If we can pick up on the defensive end and do the things that we’ve been doing that has garnered success, stay away from selfishness, and our guys play together,  it should in turn lead to success.”