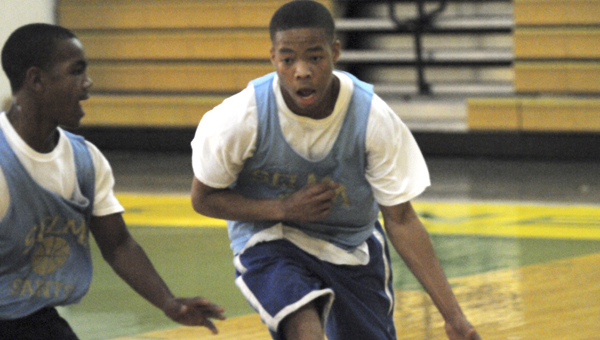 The Selma High School boy’s basketball team is setting the bar high with the season on the horizon.

“We’ve been a winner throughout my career here, so as always, my goal is to win a state championship,” Jackson said.

The Saints will have to replace four starters from last season’s team, and Jackson says they will rely on teamwork to find success on the hardwood.

“This year, I would say total team play will be a strength because we’ll be young,” Jackson said. “We have a couple seniors, but we had four starters to graduate last year. We only have one starter back. The key for this team will be total team, hustle defense, desire and a will to want to win because we don’t have that marquee player back.”

Jackson is looking for that one returning starter, Kerry Mitchell, to step into that marquee role.

“Kerry Mitchell did an outstanding job for us last year,” Jackson said. “He was an All-Star participant this summer in the North-South game.”

Jackson said defense will also play a major part in how successful the Saints are on the court.

“We always like to key in on the defensive side of the ball and playing solid defense,” Jackson said. “As a defensive team, we hope to minimize our turnovers and we hope that our defense can create easy offense for us.”

Along, with good defense, Jackson said leadership from the few seniors will also be important.

“It’s going to be very important,” Jackson said. “We just hope that they mature and grow up, step in and take that leadership role. We look for that both on and off the court. As your seniors go, your younger players go, so we preach that every day that we want our seniors to step forward, step up and perform in practice, because if you perform outstanding in practice it carries over to the game.”

The Saints will open the season against Keith High School next Thursday at 5 p.m. at Wallace Community College-Selma.