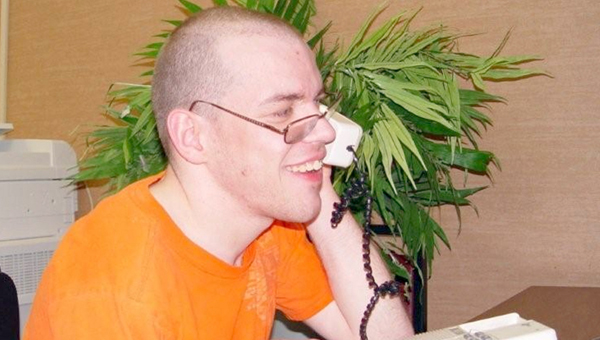 Sammie Beard was one of the first clients of the Early Intervention program at Cahaba Center for Mental Health. -- Special photo

When Early Intervention was brand new to Selma, Sammie Beard enrolled and started a journey that helped him reach milestones previously thought impossible.

Today, he’s a young adult who has grown up with programs offered through the Cahaba Center for Mental Health and enjoys being an active part of the community.

Beard lives in a group home with other adults with disabilities and attends the Day Activity Center, which serves 68 people in Dallas County. Another 29 adults are on the waiting list.

He plays computer games, exercises at the YMCA, enjoys movies at the Performing Arts Centre, goes to dances in his wheelchair and attends church.

It’s a life that his grandparents, who took care of him until adulthood, only dreamed about, and it’s made possible in part by the local United Way, which contributes funds to the program for adults with intellectual disabilities.

“We are very fortunate that Sammie was able to transition into the day program and group home when he did,” Darlene Beard said. “Sammie’s father had died, and it had gotten to the point where Ferrell l and I couldn’t pick Sammie up anymore.”

Now in their 70s, the Beards raised Sammie after his parents divorced. Darlene realized her grandson wasn’t developing, and tests diagnosed cerebral palsy.

“To start with, things did not look good. He could not sit up or talk, but after surgery on his legs, I turned around one day, and he was sitting up. He was probably  2 years old,” Darlene said.

At early intervention, therapists taught the Beards how to work with Sammie to stretch his arms and legs and how to gain fine-motor skills in his fingers. They worked tirelessly on speech, talking to him and making tapes of songs he liked.

As the Beards became more involved with Sammie’s therapy, they joined forces with the center, and Ferrell made some kneeling benches to help other toddlers with weight bearing. Later, Darlene was hired by the center and eventually worked as director of the group homes.

Since her grandson has been at the day program for adults, Darlene said, “I’ve been up there and watched him. He is learning to handle money, and he’s even learned to use a telephone so he can call us when he wants to.”

Other consumers such as Margaret Gamble enjoy office work, so she sometimes operates the copying machine. In her recreational time, she makes pillows and pretty bracelets.

“Each consumer’s program is individualized based on abilities and desires. They make choices about what they want to participate in,” said Barbara McCord, coordinator for the day training program. But in general, the staff teaches independent living skills, self-care and household skills. They also participate in or attend the Special Olympics, the annual Halloween costume party, annual picnic, Christmas dance and work in the ceramics studio or greenhouse.

“We have an in-house work crew of consumers who are paid minimum wage, but the biggest thing is not the monetary value of the check, but the self esteem from having a job and cash that they can use to buy what they want,” McCord said.

Some of the work crew also help transplant the downtown flower beds, and those who participate in ceramics go to Riverfront Market Day, the Orrville Tractor Show and Valley Grande Founders Day to sell their creations. Some also enter their pieces in the Central Alabama Fair where “a lot have won first place and really done well. They enter in the regular adult category,” McCord said.

For parents and grandparents like the Beards, the Cahaba Center has made the difference in their children’s ability to be as independent as they can be.

“As Sammie reached adulthood, we knew our time was relatively short, comparatively speaking, and we wanted to make sure that he was cared for,” Darlene said. “We knew it would take some time for him to adapt to the group home. He wasn’t happy at first, but over time, he adapted extremely well.

He still comes to our house for visits and holidays, but after church on Sunday, he tells us he’s got to go home.”