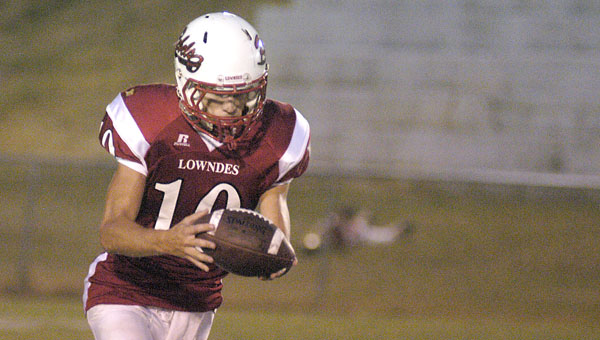 The Lowndes Academy Rebels fell to Autauga Academy 53-14 at home in Hayneville, Friday night. But the Rebels will get another shot at the Generals this coming Friday night in the first round of the state playoffs in Prattville.

Rebels’ head football coach Art Sullivan saw a positive effort in defeat and will try to find a way for his team to slow down the Generals the second time around.

In last Friday night’s battle, Toby King carried 10 times for 90 yards for the Rebels, caught five passes for 72 yards and scored two touchdowns. King scored once on about a 50-yard run and a second time on about a 20-yard screen pass from quarterback Hank McIntosh.

McIntosh was 9 of 19 passing for the Rebels for 101 yards and one touchdown. And Cody Harrell kicked both the Rebels’ extra points.

“We played pretty good in spots, but we just gave up the big plays and couldn’t stay with them,” said Sullivan. “They’re a pretty good team.”

As the Rebels will go on the road to face the Generals this Friday night, Sullivan said,

“We’ve got to work on some stuff to maybe slow them down a little bit.”

Keith High School head coach Harry Crum said the Bears will have to be on top of their game when... read more