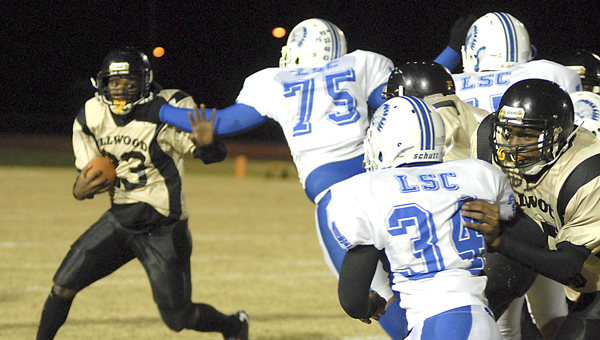 The Ellwood Christian Academy Eagles’ final game was a mirror image of many others this season.

The Eagles again started slow in their 48-6 loss to Lakeside School at Memorial Stadium and stiffened in the second half. Head coach Mike Stokes said his team has had a problem getting out of the gates all year.

“That has been the story for us all season,” he said. “We always come out like that and,  then we start playing like we are supposed to.”

Lakeside struck early and often. The Chiefs needed only two minutes to get on the board. Ja’Cory Hobdy finished a six-play, 71-yard drive with a 31-yard run to make the score 6-0. Trevor Davis hit the extra point to make the score 7-0.

On the Chiefs’ next possession, it was more of the same. This time, Desmond Richards finished the drive with a 12-yard run to make the score 13-0 with 5:49 to go in the first.

The Chiefs needed only 41-seconds to get on the board in the second quarter as Daquan Guice broke free for a 9-yard run to make the score 21-0 after the extra point with 11:19 to go in the half.

A blocked punt later in the quarter gave the Chiefs a short field at the Ellwood 10-yard-line and they would take advantage of the field position immediately. On the first play after the turnover, Richards broke free for a 10-yard scamper to make the score 27-0 with 5:37 to go in the half. The extra point failed.

The Chiefs added one more score when Garrett Mitchell scooped up an Ellwood fumble and went the distance for a 60-yard score. Tyler King hit Brody Thomasson for the two-point conversion to make the score 35-0 with 30 seconds to go in the half.

In the second half, the Eagle defense stiffened, holding the Chiefs to 13 second-half points.

The Eagles kept Lakeside out of the end zone until Hobdy broke free for an 11-yard score with 4:43 to go in the third quarter.

The extra point was good putting the Chiefs on top 41-0.

Ellwood finally got on the board in the fourth quarter when Deriaun Glenn, who led the team with 64 yards on 16 carries, broke free for a 9-yard score with 2:01 to go in the game.

The conversion failed, leaving the score 41-6.

The Chiefs gained their final points on another turnover when Trevor Davis returned an Ellwood fumble 57 yards for a score with 26 seconds left.

The Eagles, who finished the season 0-11, will use the offseason to correct mistakes and prepare for 2012, Stokes said.

“We’ll take a few days off, and then we will hit the weights,” he said. “We are only losing a couple of starters, so we should be much better next year.”