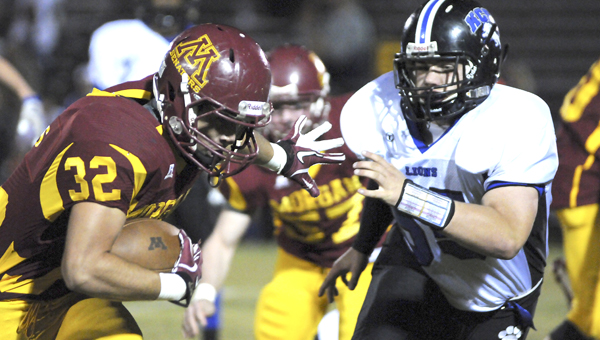 After a 10-game schedule, the Senators are using this week to get healthy before the postseason.. -- File photo

The Morgan Academy Senators have an unexpected bye week after opponent Southern Academy forfeited due to low numbers and injuries, but that doesn’t mean they’re taking a vacation.

The Senators (6-3, 4-2) are using this week to heal up and prepare for the first round of the Alabama Independent Schools Association Class 3A state playoffs, which begin on Nov. 4.

“We’re letting everybody heal up,” said Brian King, head coach of Morgan Academy. “We’re pretty banged up going into this week. It’s actually been a blessing that the Southern game didn’t come about. We don’t have a lot of guys and we need everybody at 100 percent. The guys have been banged up, so they’re working on their rehab stuff, not to say we’ve been going slow at practice, just not putting ourselves in situations where something happens that we don’t need.”

King said the Senators were notified by a letter from the AISA last week that the Southern game was off.

“We were told last Tuesday (Oct. 18) that we weren’t going to be playing in it,” King said, “but it wasn’t official until this past Monday.”

King said the Senators are using the time to prepare their defense for next Friday’s trip to Auburn where they’ll play first-round opponent Lee-Scott Academy.

The extra time, King says, has enabled the Senators to get a head start in preparation for the do-or-die game next Friday.

“It gives us an extra week to go over what Lee Scott does. We’re working on our defensive sets and we’ve already got everything in,” King said.

“Now we’ve got three extra days to fine tune everything we’ve got. We’re already ahead in what we’re doing, and it’s a great advantage. Hopefully, we can do something with it.”

Not only has the week off given the Senators extra time to prepare for Lee-Scott, it’s also given them time to perfect what they’ve been working on.

“We’re usually scrambling by Wednesday to get everything else in,” King said. “We’ve already got everything in that would be by that point. Now, it’s just fine tuning and getting it where we’re running it perfect. It allows the kids to be more familiar with it, it’ll create less mistakes, and lets us put little things in order to try and take advantage of situations as far as passing downs and things like that.”