Selma fans called for Pink Out 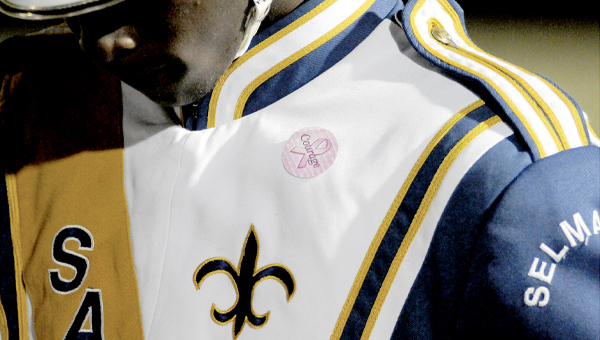 A member of the Selma High marching band displays a pink sticker he and other members of the band wore during last season’s ‘Pink Out the Stadium’ event in support of October being breast cancer awareness month. -- Tim Reeves

When fans gather at Memorial Stadium for Selma High School’s football game against Demopolis Friday night, they won’t just be cheering on the Saints, they’ll also be showing their support for a cause.

Friday will be ‘Pink Out the Stadium’ night at Memorial Stadium, as fans are encouraged to wear pink in honor of Breast Cancer Awareness Week.

“The purpose of the pink out is to continue to make people aware of breast cancer,” said Tanya Miles, co-chair of Selma-Dallas County Relay for Life. “This is an activity that we implemented last year, which was a great success, where we ask all the Selma Saints’ fans to wear pink to the football game.”

Memorial Stadium will be decorated with pink balloons and literature will be passed out to those in attendance in order to raise awareness about breast cancer.

Selma High players will have pink ribbons on their helmets and Selma coaches will wear pink wristbands as a show of support.

The fans in Memorial Stadium won’t be the only people on Dallas Avenue showing their support.

“This year Morgan Academy will also join in with the pink out,” Miles said. “They’re going to pink their stadium out Friday night as well.”

“As always, early detection is the best detection,” Miles said. “If we can keep the literature there, and keep breast cancer in the forefront of people’s minds, we feel like we’ll have more survivors.”

Miles said the pink out would be another event in Breast Cancer Awareness Week leading up to Wallace Community College’s 5K Run/Walk on Saturday, Oct. 22 at 8 a.m.

Proceeds from the 5K Run/Walk will support Living In Hope, an organization that provides transportation assistance for cancer patients.

Members of Teen Challenge head out on the second stage of their charity bike ride Wednesday morning. The riders, who... read more