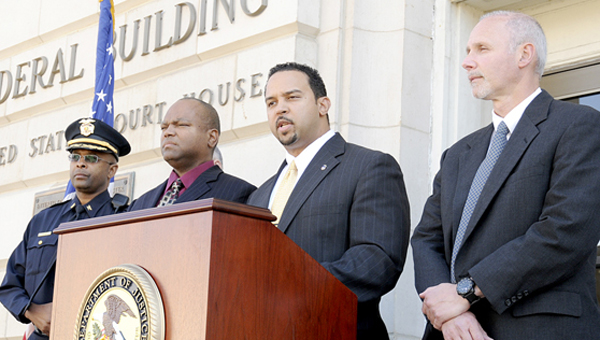 U.S. Attorney Kenyen Brown, at podium, leads a press conference Thursday announcing many of the individuals suspected in a May break-in and burglary at the Alabama Farmer’s Co-Op, where 41 guns were stolen, have been arrested and charged by authorities. -- Tim Reeves

For months, Central Alabama Co-op Manager Tim Wood lived in fear that one of the many guns stolen from his store would be used in a violent crime.

This week, he said his mind was at ease when U.S. Attorney Kenyen Brown and local authorities announced 15 defendants in six separate indictments had been charged with Federal firearms violations stemming from the May 22 burglaries.

When the news was first delivered to him, Wood said he was overjoyed.

“It was a relief more than anything because the last thing in the world you want is a gun from your store to be used in a crime. That’s the last thing we want,” he said.

Brown said 14 of the 15 named in the indictments have been rounded up. He also said there were others involved who have not been named because of their juvenile status.

“The investigation also revealed five other people were involved in these burglaries, but they were juveniles,” he said. “Those cases have been referred to the state so they can be prosecuted.”

Forty one weapons, including handguns, rifles and shotguns, were stolen during the burglary and, after a joint investigation by the Alabama Bureau of Alcohol, Tobacco and Firearms and Explosives, the Alabama Attorney General’s Office, the Fourth Judicial Task Force and the Dallas County Sheriff’s Office, with the assistance of the Selma Police Department, 19 of the weapons were recovered.

The statutory maximum penalty for the alleged violations is 10 years imprisonment and a fine not to exceed $250,000.

Brown, who noted the growing number of violent crimes in Selma and Dallas County, said he hopes the indictments serve notice this behavior will bring consequences.

“Selma and Dallas County will not be held hostage by a few individuals who wish to terrorize law abiding citizens,” he said. “Hopefully these indictments, arrests and the recovery of these 19 of the 41 firearms will go a long way towards making this community a safer and more peaceful place to live.”

During the conference, Fourth Judicial Circuit District Attorney Michael Jackson said the burglary is a piece of a growing puzzle in Selma. However, he added, with multiple law enforcement offices working together, criminals will be arrested and put away.

“This is part of a problem we have called G.G.D. — gangs, guns and drugs,” he said. “This shows what happens when we all work together.”

Though 19 weapons were recovered, all parties involved said they are concerned that 22 remain in the hands of criminals.

An ongoing investigation to recover those weapons could bring additional indictments, Brown said.

“There are still 22 guns out there and someone has to have them,” he said.

Brown encouraged anyone with information related to the stolen weapons to contact the local ATF office at (251) 405-5000.

Selma fans called for Pink Out

A member of the Selma High marching band displays a pink sticker he and other members of the band wore... read more