Parents: ‘We will not give up’ 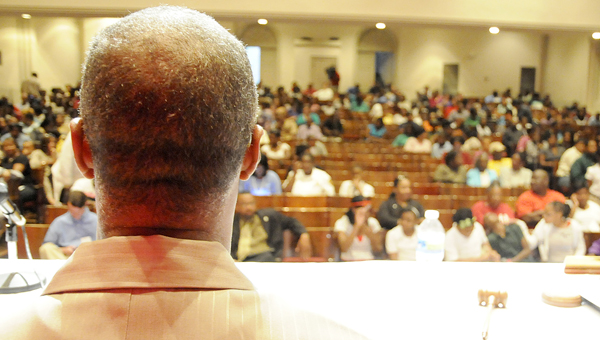 Selma City School Board president Henry Hicks sits in his seat atop the stage at School of Discovery’s Pickard Auditorium Tuesday evening. Hicks and Dr. Udo Ufomadu were the only school board members to show for the specially called board meeting. -- Tim Reeves

The doors were unlocked and the lights were turned on at School of Discovery’s Pickard Auditorium.

Even the nameplates for each of the five Selma City School Board members and their attorney were placed in their proper place.

The only problem is that three of the five school board members decided not to show up to a special called meeting Tuesday, leaving more than 300 parents and residents with no school board to talk to.

“We came prayerfully, but we fully expected them not to show,” said Carolyn Robinson, an organizer with a group of parents and residents petitioning the board to reverse last week’s decision to place superintendent of education Dr. Donald Jefferson on administrative leave. “We have already collected 1,001 signatures on a petition that we were prepared to give to the board tonight. But that obviously did not happen.”

Board president Henry Hicks, who, along with board member Dr. Udo Ufomadu were the only two board members to show up and waited 20 minutes before declaring the board did not have a quorum and would not be able to hear comments from parents and residents as planned.

For it to be an official meeting, at least three board members would have needed to show up.

“I want to say that I am sorry, but based on advice from our attorney, Dr. Ufomadu and I will not be able to hear from you tonight,” Hicks told the crowd.

Board members Holland Powell, Brenda Randolph-Obomanu and Frank Chestnut Jr., the three members who cast votes last Thursday to place Jefferson on administrative leave, did not show up, forcing the meeting to be called off.

But just because school board members were not in attendance, didn’t mean those who called for the meeting didn’t have something to say.

For an hour, those in attendance, discussed their plans to continue to picket the school system’s central office on Broad Street in addition to discussing the legal guidelines of picketing school board member’s homes and businesses.

Organizers also shared the phone numbers, email addresses and home addresses of those members who voted to place Jefferson on administrative leave, asking parents to “flood” the numbers asking the board to reconsider their decision.

Another organizer, Tammy Maul, strongly encouraged those in attendance to be sure to attend Tuesday’s called board meeting, where board members will discuss terminating Jefferson’s contract.

Currently, the called meeting is set for Tuesday, Oct. 25 at 6 p.m. and is to be held in the central office’s board room.

Maul said concerned parents and residents should come in force, filling the boardroom, the halls, the patio and the parking lot, letting board officials worry about how to accommodate the crowd.

“Parents, we are not going to let where they hold this meeting deter us from coming,” Maul said. “If they hold the meeting in a matchbox we will be there.

“It is up to them to handle the crowd, not us.”

Maul also said to those who plan to attend Tuesday’s meeting they should be prepared to help stop any action trying to terminate Jefferson’s contract.

Following the meeting, Robinson would not say what the group would do to shut the meeting down and admitted that if the vote goes through to terminate Jefferson’s contract, her group will continue to fight for Jefferson’s reinstatement.