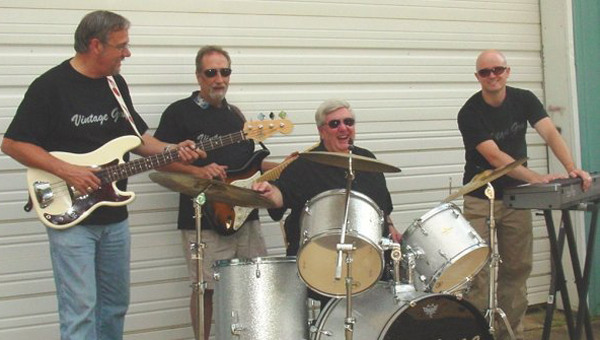 Vintage Gray will again appear at Market Day to perform a variety of music. -- Special photo

The eclectic sounds of the 1960s and 1970s brought the likes of Jimi Hendrix, the Supremes, The Beatles, Donna Summer, Journey and the Rolling Stones to the forefront. Now the taste of the era will make a stop in Selma, for the Riverfront Market Day, Saturday, Oct. 15.

The band includes drummer Buddy Gray, bassist and vocalist Mike Robinson, lead guitarist Chap McDaniel and keyboardist Steve Rayborn. Members, who are in their 50s, hail from Washington D.C., Tuscaloosa and Mississippi and have graced the stage with such artists as Stevie Wonder and Alabama.

“They are best known for how well they play classical rock,” said Sarah Gray, wife of drummer Buddy, who travels with the band. “Their structured harmonies are similar to The Beatles, but they also have the drive of some of the best rockers … these guys are really good … if you like Oldies, this might be your type of music. They’re a fun group, really high energy.”

Gray said she believes people will enjoy the band because it brings back memories for older crowds.

“Older folks have great memories of the songs the band plays and younger folks have listened to the classic rock songs most of their lives and have an appreciation for the music also,” Gray said. “The band chooses the songs they play to make an audience enjoy themselves and feel good. Every song makes you want to dance.”

As the band was well received in last year’s Market Day, Gray said the band is excited to come back.

“We are looking forward to being back in Selma,” Gray said. “We had a great time last year and (we) anticipate the same this year.”

Market Day will take place along Water Avenue. Gates open at 9 a.m. Tickets are $2 for adults, $1 for children 12 and over and free for children under 12.

A motion from the Selma City School Board Thursday could have superintendent Dr. Don Jefferson on the brink of termination.... read more