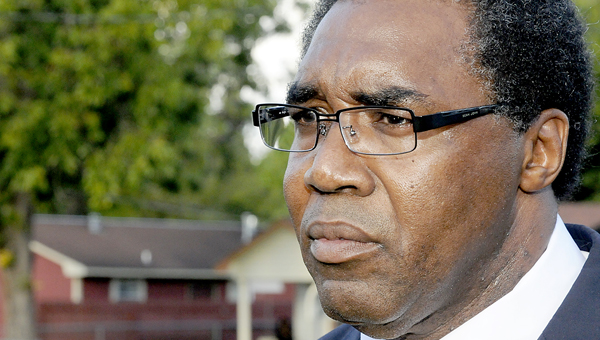 A motion from the Selma City School Board Thursday could have superintendent Dr. Don Jefferson on the brink of termination. -- File photo

An unexpected motion, a report by the school board’s attorney and an admission of a contract approved without board approval has placed Selma City School superintendent of education Dr. Donald Jefferson on administrative leave and on the brink of termination.

During Thursday’s school board meeting, board member Frank Chestnut offered a motion admonishing Jefferson’s handling of a contract and called for Jefferson to be placed on administrative leave immediately ahead of an Oct. 25 hearing, that could lead to Jefferson’s contract being terminated.

“It was a clear-cut case of insubordination and unprofessional conduct,” Chestnut said following the meeting. “I do want to say that we need to let the process work itself out. We’ll have a hearing and see where it goes from there.”

It appears the main reason for the board’s action, which received a 3-2 vote by board members, dates back to a contract with STI Achievement Services for the 2010-2011 school year.

The timeline for the contract being authorized by Jefferson was laid out by board attorney Katy Smith Campbell, who concluded in her report that “board procedures were not followed by Dr. Jefferson to enter into the contract with STI Achievement Services.”

In his motion calling for Jefferson to be placed on leave, Chestnut detailed what he considered the insubordination act.

Prior to the motion calling for Jefferson to be placed on leave, the board, by the same 3-2 vote, voted down Jefferson’s motion to authorize last year’s STI contract and the STI contract for 2011-2012.

The board members voting against the contract and those voting in favor of placing Jefferson on administrative leave were Chestnut, Brenda Randolph-Obomanu and Holland Powell. Board member Udo Ufomadu and board president Henry Hicks sided with Jefferson.

“I had completely no idea this was happening,” Hicks said after the meeting. “This was completely out of the blue. People need to do what they feel they need to do, but, this one is, I don’t know, I am at a loss for words.”

Hicks, who said the contract being approved without board consent was an “oversight” and should not have led to the point where the board may be poised to terminate Jefferson’s contract.

“If there is a problem with the superintendent, as a member of the board, I would dare say that we need to discuss it,” Hicks said. “But to bring it to this point, to recommend and vote for administrative leave and talking about killing a contract; we don’t need to be buying out more contracts, especially when we have a superintendent that’s trying to do the best he can.”

As for Jefferson, he said contract approval was an oversight on his part and on the part of the board, as they had discussed the results of the company’s work multiple times last year. But, he said the move by the board Thursday was one based on politics.

Even before the contract dispute and the call for him being placed on administrative leave, Jefferson and members of the board had been at odds, even leading up to Jefferson preparing legal action against the board.

In late August, Jefferson’s attorney Terry Davis had asked the board to remove what he and Jefferson considered a letter of reprimand from Jefferson’s file and apologize within 10 days.

The letter, which board members issued Jefferson calling for him to receive additional human resource training, was not removed from his file, and now, Jefferson said after Thursday’s meeting, legal action will move forward.

“Oh, yes, 100 percent,” Jefferson said when asked if he will now ask his attorney to move forward with the lawsuit. “They [the board] knew what was coming. I had it on my agenda tonight to ask them again to remove the letter. But that didn’t happen.

“We are going to move forward with the suit.”

After voting to place Jefferson on administrative leave, the board approved the appointment of Gerald Shirley as interim superintendent of education.