Jones wants to end with wins 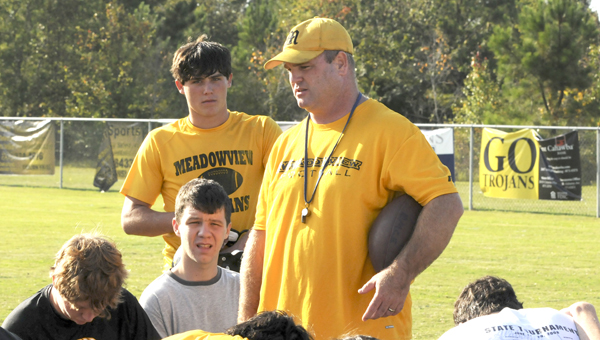 New Meadowview Christian School head coach Lebo Jones said he hopes the Trojans can end the season on a potitive note and build for the future. Jones took the top post for the Trojans after the dismissal of John Glasscock last week. -- Robert Hudson

Following the dismissal of head coach John Glasscock last week, the Meadowview Christian School Trojans are looking to move forward and find success on the gridiron.

The Trojans (1-7, 0-5) will be home at Wasden Field when they play the Jackson Academy Eagles (6-1, 3-1) Friday at 7 p.m. in a region contest. Trojans’ new head football coach Lebo Jones said his team is looking to move forward in its second game after Glasscock’s departure.

“We’re trying to move forward by getting back to the basics and trying to get a positive attitude,” Jones said.

“The boys are responding well. We’ve had a whole week of real good practices and the team’s ready to play.”

Jones said the Eagles are a good football team loaded with talent.

“Jackson’s got a great ball club,” Jones said. “They’ve only lost one game and that was to Autauga by three points. They’ve got real good athletes down there. They run the spread offense mostly.”

Jones said the Trojans are looking to control the ball to give themselves a chance to win.

“What we’re going to try to do is run the ball right at them and control the ball, try to burn some clock and keep their offense off the field,” Jones said.

Jones said he’s excited about the future of the Trojans’ football team and he looks to make the most out of the opportunity of being the head football coach.

“It means a great deal to me,” Jones said. “I’m glad I got the opportunity. I hate to see coach Glasscock go. He taught me a lot, but when I was offered the position I was glad to take it, and I want to help the school in any way I can.”

Jones said he wants the Trojans to gain some momentum that they can take into the offseason.

“We want to try to win these last three games or at least two of them to have a positive attitude going toward next year,” Jones said. “If we win a couple of games, it would mean the world to these kids and everyone would be excited going into spring training.”

By Robert Hudson The Selma Times-Journal A group of local golfers showed recently that you’re never too old to have... read more